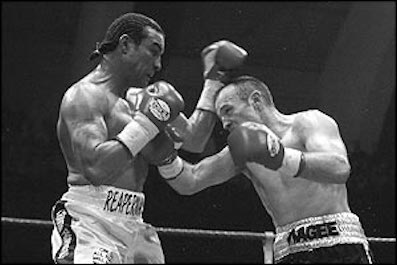 On paper, Carl Froch versus former WBC World Champion Robin Reid is a terrific battle, positioning the veteran Runcorn man as the final, and arguably, superfluous gatekeeper to the British champion’s ascent to the international scene.

In reality, Froch doesn’t need the fight to further substantiate his credibility on the domestic scene, but a knee operation has encouraged caution, a pause for breath before capitalising on his high rankings with every sanctioning body.

Honestly. Froch is ranked in the top 5 by the WBC, WBA, IBF, CSI, B&H and UPS. Robin Reid’s claims his competitive advantage to be, you guessed it, that old favourite – experience. True, experience is – to follow the cliche – a commodity you cannot buy. I’ve yet to meet a market stall selling speed, youth or power either but if we’re to indulge Reid; experience is a valuable asset. Of course, there is a difference between experience and being just plain, old fashioned, washed up.  Experience doesn’t have a great track record of late either.

Arturo Gatti, the most experienced fighter of all – if hours spent at boxing coal face constitute experience – found that the experience of big fights he felt would prove decisive for game Alfonso Gomez meant precious little once the bell rang.  Erik Morales toiled gamely and beat David Diaz according to some opinion but ultimatley, the experience proved little assistance in his quest to claim his fourth title. James Toney discovered laps of the block, metaphoric rather than literal I hasten to add, were little use when faced with an improving young opponent.

Robin Reid is an inactive fighter, one who has soared higher than the British belt he now suggests provides sufficient motivation to go through the mill of training one more time. He is also 36 years old. Froch is a seasoned professional too. At 29, he’s no newbie to the professional ring or unaccustomed to championship distance fights. He’s in his prime. Contemplating Robin Reid in his prime requires a long memory and soon faculties.

Sure he has the win over Magee, a scrappy, unsatisfactory victory three years ago against an opponent he claims is Froch’s only decent opponent to date, but Froch knocked out a more confident version of the Irishman late on.

Reid, Jeff Lacy aside, has always had an excellent chin and Froch’s KO power is still yet to be proven at world level but I suspect his reputation as a puncher will be enhanced by stopping Reid in 8 rounds.

8 thoughts on “Boxing: Who gives a Froch about experience?”