When Junior Witter, the WBC Light-Welterweight champion, dips his sculptured frame and no doubt intricately shaven head between the ropes at the Doncaster Dome tonight he will not be the first ‘World Champion’ to grace a ring in the South Yorkshire town. But it feels like it.

True Johnny Nelson, Witter’s former gym mate, beat Adam Watt in a low-key defence back in 2000 and Acelino Freitas – the Brazilian knockout artist – fought Barrie Jones a year later. Yes, the Freitas who went on to share a ring with Diego Corrales and Joel Casamayor once fought in little old Doncaster. But the WBO baubles at stake were peripheral prizes at the time.

By way of contrast, leading Witter to the ring will be a member of the legendary Ingle stable, arms aloft, clutching the famous green and gold WBC belt. And while all that glitters isn’t gold, there is little disputing the weight of history Witter carries as the current custodian of the most prestigious Light-Welterweight belt.

Witter now regards Doncaster, or Donny as natives refer to it, as home having moved from his Bradford roots to join his girlfriend there. It usually takes more than a girlfriend to claim such belonging, but as a son of the Yorkshire mining town I’m happy to indulge the former British, Commonwealth and European Champion. It’s a new angle for promoters Hennessy Sports to take and it offers opportunity for the town to embrace a world champion as one of their own.

The most recent world champion to visit the town was a fallen one; Prince Naseem Hamed. Witter’s arrival will be lower key, despite the significance of the bout, but infinitely more welcome than Hamed’s brief residence at the local gaol last year.

The last world champion Doncaster actually produced was a newsagent from Mexborough, a village built around one of the now dormant coalmines, and he played Darts. Before him, Doncaster came mighty close to claiming a heavyweight champion. Only the true boxing historian will be aware of the BBBofC’s willingness to recognise the clash between beefy Bruce Woodcock and American gatekeeper Lee Savold in June 1950 as a world title fight. Jack Solomons, a renowned opportunist, sought to snatch first claim to Joe Louis’ vacated crown with the popular Yorkshireman but a long, ugly gash over his left eye left the wily promoter and the 50,000 in attendance crest-fallen. What Junior Witter wouldn’t give for that type of support.

Few beyond European shores recognised the fight as a world-title fight and Ezzard Charles’ victory over a returning Joe Louis three months later essentially extinguished any flicker of legitimacy Savold held. Louis would defeat Savold a year later to further endorse Charles as the true world champion. Half a century on Woodcock remains Doncaster’s most famous boxing son and it perhaps apt as the tenth anniversary of his death approaches that world-class boxing is returning to the town.

Witter is persistently hampered by a lack of ticket buying support of the type Woodcock enjoyed, veteran actor Brian Blessed was one of as many as 5,000 who would turn out simply to see him train. A Yorkshire champion as a schoolboy, Blessed held his own aspirations of boxing glory, on meeting Woodcock he remembers the honest champion, recently drubbed by Joe Baksi, urging him to look beyond boxing; “I thought boxing was going to be my future career but, at the age of 12, I met Bruce Woodcock, a champion boxer who had taken a dreadful beating. He told me not even to consider it and I heeded his words.”

This lack of fan-base continues to hurt Witter’s career and is being used readily by those who would prefer to denigrate his ability and achievements rather than fight him. True, he is an acquired taste, as so many products of the Ingle gym are, but there is no disputing Witter can box. Unorthodox admittedly, but the scalps of N’Dou, Corley, Kotelnik and Bergman are not collected without skill and craft. 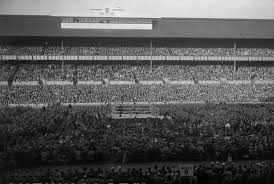 Like Woodcock, Witter is a reserved character, preferring to hone his craft as opposed to the type of myopic pursuit of cheap celebrity favoured by fellow sportsmen in these fame-hungry, voyeuristic times. Witter is never pictured falling out of night-clubs, driving ostentatious cars or wearing the gangster ‘bling’ favoured by some of his contemporaries. His understated personality would have resonated with Woodcock. Writing his obituary for the Independent in 1997, Bob Mee recounted how Woodcock, fresh from knocking out Jack London to claim the British Heavyweight crown in a major out-door event at White Hart Lane, chose to drive back to Doncaster rather than indulge himself amongst the bright lights of London.

Both men could punch too, Bert Gilroy, the Scotsman steadily being built as a legendary boxing martyr, ignored and avoided by the fight game, said being hit by Woodcock was akin to “getting hit by a fuckin’ freight train!” Nobody has yet spoken about Witter in such exalted terms but the speed and unorthodox delivery of his punches has troubled all of the fighters he’s encountered at world-level thus far. His opponent tonight, Vivian Harris, will be the first with knockout power of his own.

Witter will also be giving up height and reach to the former WBA Champion, making it difficult for him to employ his usual counter-punching style. Indeed his finest moments have come in the face of forward marching opponents like Lovemore N’Dou, when he’s required to ‘make’ the fight he’s looked ungainly and uncomfortable. Harris, usually a fast starter, may elect to be more patient to lure Witter onto his stiff right hand.

In comments made before departing for the UK, Harris implied his straight punching would be the key to victory. He will also have witnessed the problems Witter had unlocking orthodox, technically correct fighters like Andreas Kotelnik and Colin Lynes. Witter increasingly looked for a single punch in performances vaguely reminiscent of the latter day Naseem Hamed in unsatisfactory victories over the likes of Cesar Soto and defeat to Marco Antonio Barrera, once the early barrage failed to shift an opponent.

It seems strange to suggest a fight between the WBC world champion and the former WBA world champion represents a final eliminator but it has that type of flavour. The victor will emerge as the leading fighter at the weight beneath the part-time presence of Ricky Hatton and ahead of fellow contenders Paulie Maglinaggi (IBF), Gavin Rees (WBA) and Ricardo Torres (WBO). Defeat will quash any lingering hope Witter has of tempting Hatton in to the fight the whole of Britian has craved since 2001. Unless by dramatic knockout, defeat will be less damaging to Harris as the away fighter. And in the final analysis of two well matched fighters, that single factor could prove critical.

Woodcock, who Doncaster legend fables fought off three youthful muggers when well into his sixties, would have raised a glass – were he still pulling pints in The Tumbler – to the willingness of the two fighters face each other. It would have been easier for Harris to wait for a fight in the US, and for Witter to avoid the dangerous American.

Despite home advantage, I think Harris has the tools, experience and hunger to prevent Doncaster proclaiming Witter as their first world champion.

At which point locals will remind the world that Witter is, in truth, from Bradford.

For a host of unique, unofficial, unendorsed tribute wear, made to order and shipped within 48 hours visit http://www.boxingwriter.spreadshirt.net or click on the image below.

3 thoughts on “Boxing: Witter, Woodcock and the world title that never was”