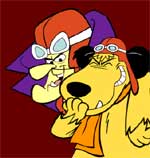 Once inter-promoter arguments begin it is hard to keep track, apportion blame or see the wood for the trees. However, Brian Peters, the promoter of popular Irishman Bernard Dunne, was obviously irked by Frank Maloney’s press release this week, which claimed Dunne’s camp were ducking his improving European champion Rendall Munroe. Of course the pair could be in cahoots and sniggering backstage at the attention they’re generating for a fight which could prove beneficial to both fighters.