Make my own decisions

There was an unerring symbiosis between Saturday night’s principle contests. The old and the new, the real and the forged, the premature and the belated. A pair of bookends to boxing’s top shelf of literature.

In London, unbeaten heavyweights Joe Joyce and Daniel Dubois duked it out to an 8 second TikTok loop of crowd noise for a prize as old as the gloved sport they excel in. While across the pond, Mike Tyson and Roy Jones Jnr., two fighters who predate Jurassic Park, tried to dig up the remnants of their glorious past against an LP of greatest hits for a belt even the WBC couldn’t produce in time.

END_OF_DOCUMENT_TOKEN_TO_BE_REPLACED 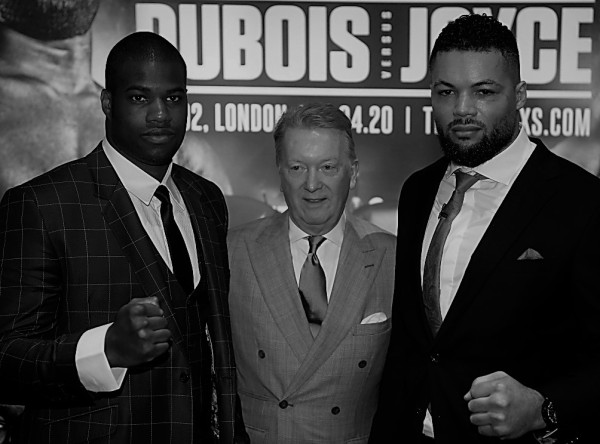 Don’t be afraid to take a big step, you can’t cross a chasm in two small jumps.

It is all too rare for unbeaten prospects to fight while still in the foothill stages of their climb toward boxing’s mountain top. So numerous and divergent are the paths to boxing’s summit; and the world titles to be found there, a prize broader and less elusive than the zenith it once represented, that exciting contenders often progress in isolation of each other. The fear of falling back from the trail tends to prove more persuasive than the rewards found in victory or the lessons of defeat.

On Saturday night, British heavyweights Daniel Dubois and Joe Joyce will dispense with the unsatisfactory custom of cosmetic record padding and pitch their unresolved potential against one another. The fighters, the division, boxing fans and the sport itself will benefit from the nobility of trying to authenticate their standing as a potential world title challenger in the old fashioned way.

END_OF_DOCUMENT_TOKEN_TO_BE_REPLACED

Heavyweights. Nothing demands attention like a heavyweight fight. Boxing bristles when the big men climb the steps to the squared circle, the air becomes charged, beer and handbags are put down, heads are turned. A truth that has echoed through the sport’s history and will, when unbeaten British prospects Daniel Dubois and Nathan Gorman face off for the British title, be confirmed once more this weekend.

A prize with more than a century of memories and boasting a gallery of the great, game and infamous of British boxing as former holders, the belt has, nevertheless, laid dormant since Hughie Fury beat Sam Sexton in May 2018. The two fighters, Dubois and Gorman, represent the youngest pairing to ever contest the belt at just 21 and 23 respectively. Hopefully, the belt will be kept active by the victor and that sense of history cherished and extended.

It is rare for two unbeaten fighters to meet so early in their career. Only the clash between James DeGale and George Groves a decade ago leaps to mind when searching for a comparable match up. Supported by the equally intriguing clash between Joe Joyce and Philadelphian contender Bryant Jennings, the O2 plays host to a bonanza of heavyweight action ESPN+ will televise in America and BT Sport will cover for boxing devotees here in the UK.

Top bookmakers are offering markets on this enticing contest too. END_OF_DOCUMENT_TOKEN_TO_BE_REPLACED

There is an inherent sadness in the face of a heavyweight gatekeeper, of which Kevin Johnson is currently the foremost practitioner. The brow is heavy, eyes dark and the breathing laboured. Aged 39 now, and with features flattened and softened by years of fists crashing in like waves against a pier, the midriff a little broader, the scales leaning a little further, Johnson cuts a forlorn figure.

In the latest instalment of his decline from unbeaten fringe contender, which he was in 2009 when he fought his only world title fight against Vitaly Klitschko, the grizzlier of the Ukrainian bears, Johnson dipped and rolled to a 10 round shut out defeat to Daniel Dubois. END_OF_DOCUMENT_TOKEN_TO_BE_REPLACED

My first look at Nathan Gorman last year led me to reminisce about Big Bad John McDermott sitting in the back of a Range Rover eating chicken legs out of Tupperware tubs. Whilst it is clear the young heavyweight has been working hard and improving under the tutelage of Ricky Hatton up in Manchester, his physical definition remains below that associated with a professional athlete.

When viewed in the same ring as Daniel Dubois, a physical specimen of Marvel dimension, it is easy to be dismissive of the fleshy 21-year-old. However, to reach such superficial conclusion is to fail to understand the nuance that exists in the making of a good fighter and the attributes that fighter may possess, i.e. boxing isn’t a beauty pageant. END_OF_DOCUMENT_TOKEN_TO_BE_REPLACED

Variety is the spice of life they say. In Nathan Gorman, British heavyweight boxing has a markedly different type of prospect to add to the flush of body beautiful contemporaries emerging in the wake of Anthony Joshua. This weekend’s victory over Mohammad Soltby was my first live exposure to the Nantwich prospect, I’ve only seen highlights and clips of his previous contests, and there was enough on display to suggest he will prove more than merely an aesthetic counterpoint to his highly regarded rivals. END_OF_DOCUMENT_TOKEN_TO_BE_REPLACED

When events are shifted from their established pattern or place it can cause discomfort for those of us accustomed to a certain way of doing things. People are nervous about such change, preferring the security and assurance of the familiar. It is this familiarity that makes a local, a local. Sitting in mine, watching boxing on Dave, I was drawn to some negative conclusions about the performance of heavyweight Joe Joyce on his professional debut. “Arm punches”, “Slow hands”, “He squares up.” “There is no power in his jab or his right hand.”

I said all of the above, some more than once. With the benefit of reflection and sobriety I’ve grown to be kinder to the effort of the giant Londoner. END_OF_DOCUMENT_TOKEN_TO_BE_REPLACED

Norwich’s Sam Sexton cut an emotional figure on the ring apron tonight, following a rough and tumble contest with Scotland’s Gary Cornish. It was a triumph built on will, self belief and old-school ring nous. Sexton overcame a giant opponent, thistles, blood, knees and wayward heads to win the British Heavyweight title for the first time and open up a host of lucrative opportunities in the months ahead. END_OF_DOCUMENT_TOKEN_TO_BE_REPLACED

“To me judges seem the well paid watch-dogs of Capitalism, making things safe and easy for the devil Mammon.”

Sunday was a long day. Tired from the all-nighter that stretched between my back row seat at the CopperBox Arena in London, where I saw Billy Joe Saunders retain his WBO bauble in a soporific engagement with a subdued, and at times motionless, Willie Monroe Jr., through to 5am back on the sofa for a thudding, if not exhilarating, bout between Gennady Golovkin and Saul Alvarez for the real Middleweight title.

I’d risen after three hours sleep, sought comfort in tea and the balm of contemplating Adalaide Byrd opening her eyes, and blinking her way in to a morning of regret. Perhaps permitting herself the hint of a smile at the word play of her husband Robert, a decorated boxing referee, asking if she wanted him to draw the curtains.  END_OF_DOCUMENT_TOKEN_TO_BE_REPLACED