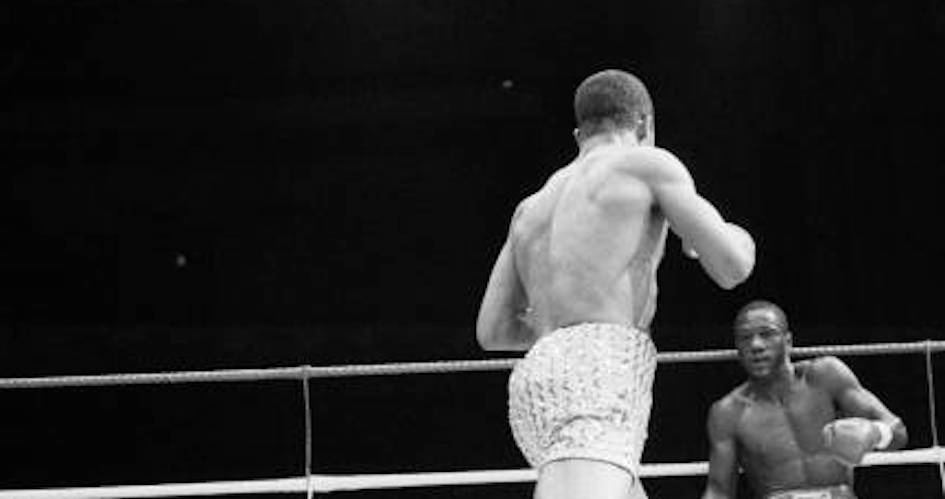 Much time has passed since last I was ringside for a boxing match. A break exacerbated by the pandemic of course. The joy of people watching, a pastime inherited sitting besides a Grandad waiting “near the Spinner” in Doncaster for a Grandma browsing in Marks’, is sweetly fed in a press seat. From those middle-age men assigned to chaperone ring card girls, to the fighter’s moll, tightly wrapped for later, the polo shirt security blinking into the darkness beyond the apron, to the men in silk pyjama jackets, bent noses all, a stray towel flung on their shoulder, boxing employs a diverse troupe of characters.

One of the most glorious attendees at any London event is the former Welterweight champion, Lloyd Honeyghan. The Ragamuffin Man is a man of sartorial individualism. From the fur coat, the spats, to the ‘Chicago’ trilby, to the cane with a leaping cat, his presence is felt the moment he enters a room. Any room. He was once afforded the front row seat directly in ahead of me at a fight card I’ve long since forgotten. Or to rephrase, I was sat behind him. That seems more respectful. Star struck, I failed to speak.

The aura to which I was prisoner that night, began 34 years ago.

I did summon the nerve on a second occasion, the Tyson Fury and Dereck Chisora encounter offering another opportunity. There was no fur coat this time, a mustard zoot suit announcing his arrival, and I blinked on the resulting photograph, but it was progress and Lloyd insisted on raising his cane to the camera. He was wearing shades in doors. This weekend marks one of many anniversaries from Lloyd’s outstanding career.

The night he fought Johnny Bumphus in 1987 is a beacon among them. Honeyghan had already performed his miracle by this point, tearing down Don Curry in two rounds just five months earlier. The arena bristled with anticipation. Bumphus’ chief second was Lou Duva. A man with a Braille complexion, a pugnacious personality and a broad, TV friendly, New York accent. A patriarch from an era nearing its end. His silk pyjama jacket was ice blue and white that night. Skin thick and folded. Passion and experience abundant beneath swept back white hair and curling black eyebrows.

Honeyghan, at his physical peak, as he was in ’87, was a ferocious foe. Winging hooks, loaded shots, aggressive, feet splayed wide, as if drawing power from the ground, pitiless and unrelenting. There was a reason Mike Tyson admired him. Bumphus was a tall, angular fighter, a southpaw and a world class contender. It mattered not. He was in trouble within a minute of the encounter at Wembley. Honeyghan’s clubbing fists rained blows about him. Ring lights bounced from Honeyghan’s shimmering shorts. He chased his quarry, Bumphus stumbled. Bumphus panicked. Honeyghan floored him heavily with a right hand at the end of the opening round. As the bell chimed the American set off for his corner, like a husband leaving the pub later and more lubricated than he’d promised his waiting spouse he would be.

In times of crisis, like the one Bumphus was submerged in, ancient fight figures like Duva are priceless friends. Offering sage advice, knowing how best to galvanise and restore their charge in the sixty available seconds. Stealing a few more when required. A special type of knowledge absorbed from the monochrome time of Marciano, of Joe Louis, of Floyd Patterson. Once a President of a local Teamster., Duva knew about fighting for his men. His fat fingers gently daubed grease on to Bumphus’ brow.

The following year, Duva would quite literally fight for his fighters, aiming blows at Roger Mayweather alongside his man, Vinny Pazienza. Another maelstrom Duva couldn’t resist. A man from an era when your word was your bond, but the handshake could come before or after throwing fists. Lou didn’t mind.

Across the ring, Honeyghan sat, eyes fixed on the tumult opposite. A 26-year-old with absolute belief, a child of Jamaica’s heat, quenched and tempered in London. Every sinew, every fibre primed for war, at his own personal zenith. Harnessing the rest too, but willing the clock to tick, eager to capitalise on the damage he inflicted in the opening session, to tock. Cameras were fixed on the troubled Bumphus corner too. Duva, 64 years old, and 8 years removed from his first heart attack, lingered, the bell rang for the second, the half pint of gristle and chewed gum still more in than out of the ropes. His late life paunch, the prize for a life of pasta and good living, pushing apart the blue silks.

Honeyghan arrived from stage left, his shoulders almost brushing Duva’s dipping crown, throwing a huge left hook mid-stride. A stunned Bumphus, still rising, like a priest pushing through a confessional curtain, barely vertical, forgot his training. The instinct to protect himself, to be ready. Mentally, he was still on the stool, or in the moments before the right that had dropped him in the first landed. Duva reacted more swiftly than his charge, remonstrating instantly and trying to intervene, that same white towel flapping from his rear trouser pocket.

Bumphus strode from the melee as the referee separated them. Incredulously, to younger eyes at least, Honeyghan was deducted a point for his impudence. American referee, and cop back in the Motown of Detroit, Sam Williams, who himself moved like a retired Pip, soft shoes, white laces, high black trousers, raised an index to each of the three ringside judges. Honeyghan remained expressionless at the sanction, feet still scraping and bouncing, the bull fixated on his disorientated matador. Bumphus wandered from neutral to home and back again trying to reconnect with the senses he arrived with. Battle resumed. Honeyghan charged forth and the fight was over moments later. Duva rushed in, wedged himself beneath Bumphus, throwing his short ham arms around the young man’s narrow waist. It was the last time Bumphus would stand in a ring. His life already afflicted by the white powder epidemic of the 1980s. Like many before and since, he couldn’t untangle himself from its grip. He passed away a year ago. Short of his 60th birthday.

When asked post fight about his charge across the ring, with Bumphus still rising from his stool, Honeyghan uttered arguably the greatest quote put to record;

His rush may have precedent, in a fight not put to tape, perhaps an echo from the era when there were no standing eight counts, when fighters could loom over fallen opponents scrabbling back to their feet. The type old faces like Lou Duva could remember. When the disappointment subsided, the New Yorker, who established a promotional and managerial business that survives today, may have smiled at Honeyghan’s throw back style and the urgency that defined his post Curry prime.

34 years ago. Can it be so long? I remember it vividly. A fight I’d have loved to tell the Grandad who used to sit people watching with me all those years ago, all about. I like to think he would have approved of Lloyd Honeyghan too.

And the naming of his great-grandson. Lloyd.

In researching this article I’ve learned that Lloyd is in poor health. If these words find him, I hope he is well and he enjoys the memories too.