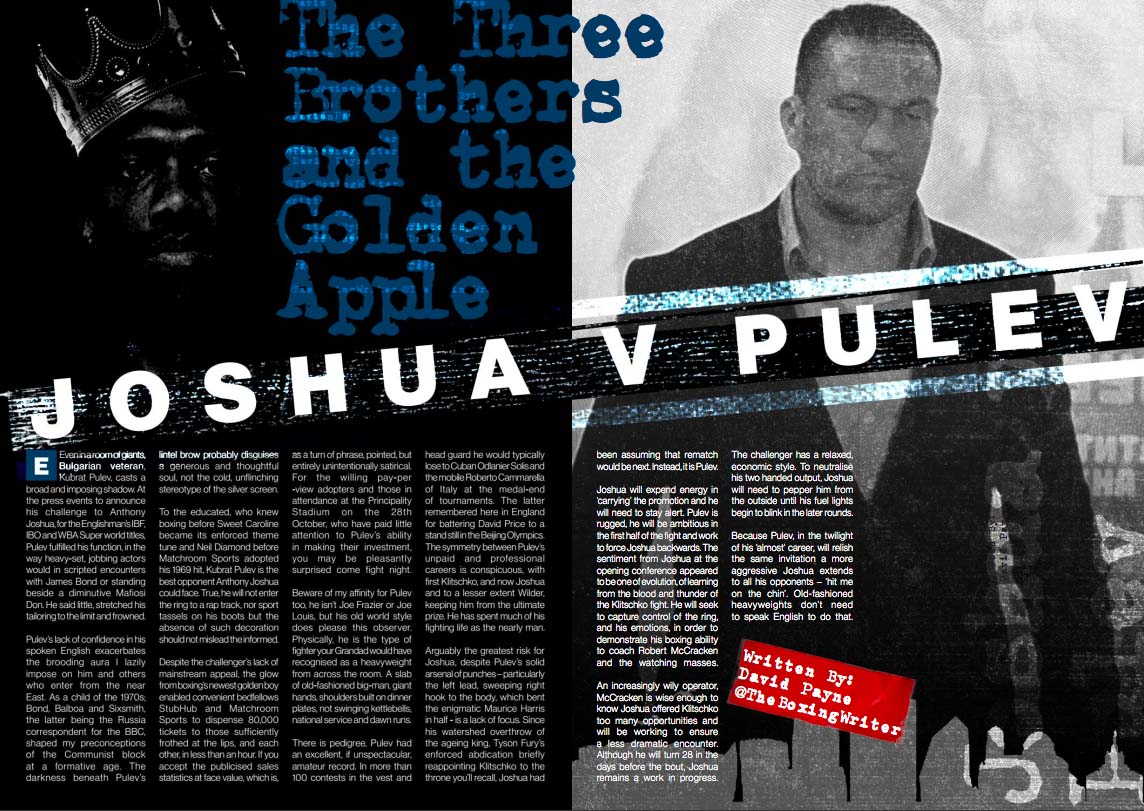 My affection for fighters is often forged on the most obscure and obtuse of foundations and the Bulgarian heavyweight Kubrat Pulev is a recent addition to this rarefied collection. Perhaps it is merely his under dog status that creates the appeal, I’m often drawn to the man with the odds against him. However, most of all I think it was probably just the suit and the look he gave the interpreter when he relayed to the waiting press that Pulev would find the fight “terrifying”.

In a world of ‘Just Do It’, Under Armour and energy drinks, not to mention table throwing, Instagram and talking in the third person, there is much to be cherished in a big heavyweight conducting himself so professionally.

The digital magazine Big Write Hook asked me to pen some thoughts on Pulev’s forthcoming challenge to boxing’s golden one; Anthony Joshua. If, by the way, you wondered about the article title, its a reference to a famous Bulgarian fable.

I’d encourage you to view the whole publication, it has some solid contributions on this weekend’s clash between Crolla and Burns too.

Even in a room of giants, Bulgarian veteran, Kubrat Pulev, casts a broad and imposing shadow. At the press events to announce his challenge to Anthony Joshua, for the Englishman’s IBF, IBO and WBA Super world titles, Pulev fulfilled his function, in the way heavy-set, jobbing actors would in scripted encounters with James Bond or standing beside a diminutive Mafiosi Don. He said little, stretched his tailoring to the limit and frowned.

Pulev’s lack of confidence in his spoken English exacerbates the brooding aura I lazily impose on him and others who enter from the near East. As a child of the 1970s; Bond, Balboa and Sixsmith, the latter being the Russia correspondent for the BBC, shaped my preconceptions of the Communist block at a formative age. The darkness beneath Pulev’s lintel brow probably disguises a generous and thoughtful soul, not the cold, unflinching stereotype of the silver screen.

To the educated, who knew boxing before Sweet Caroline became its enforced theme tune and Neil Diamond before Matchroom Sports adopted his 1969 hit, Kubrat Pulev is the best opponent Anthony Joshua could face. True, he will not enter the ring to a rap track, nor sport tassels on his boots but the absence of such decoration should not mislead the informed. Despite the challenger’s lack of mainstream appeal, the glow from boxing’s newest golden boy enabled convenient bedfellows StubHub and Matchroom Sports to dispense 80,000 tickets to those sufficiently frothed at the lips, and each other, in less than an hour. If you accept the publicised sales statistics at face value, which is, as a turn of phrase, pointed, but entirely unintentionally satirical.

For the willing pay-per -view adopters and those in attendance at the Principality Stadium on the 28th October, who have paid little attention to Pulev’s ability in making their investment, you may be pleasantly surprised come fight night. Beware of my affinity for Pulev too, he isn’t Joe Frazier or Joe Louis, but his old world style does please this observer. Physically, he is the type of fighter your Grandad would have recognised as a heavyweight from across the room. A slab of old-fashioned big-man, giant hands, shoulders built on dinner plates, not swinging kettlebells, national service and dawn runs.

There is pedigree, Pulev had an excellent, if unspectacular, amateur record. In more than 100 contests in the vest and head guard he would typically lose to Cuban Odlanier Solis and the mobile Roberto Cammarella of Italy at the medal-end of tournaments. The latter remembered here in England for battering David Price to a stand still in the Beijing Olympics. The symmetry between Pulev’s unpaid and professional careers is conspicuous, with first Klitschko, and now Joshua and to a lesser extent Wilder, keeping him from the ultimate prize. He has spent much of his fighting life as the nearly man.

Arguably the greatest risk for Joshua, despite Pulev’s solid arsenal of punches – particularly the left lead, sweeping right hook to the body, which bent the enigmatic Maurice Harris in half – is a lack of focus. Since his watershed overthrow of the ageing king, Tyson Fury’s enforced abdication briefly reappointing Klitschko to the throne you’ll recall, Joshua had been assuming that rematch would be next. Instead, it is Pulev. Joshua will expend energy in ‘carrying’ the promotion and he will need to stay alert. Pulev is rugged, he will be ambitious in the first half of the fight and work to force Joshua backwards.

The sentiment from Joshua at the opening conference appeared to be one of evolution, of learning from the blood and thunder of the Klitschko fight. He will seek to capture control of the ring, and his emotions, in order to demonstrate his boxing ability to coach Robert McCracken and the watching masses. An increasingly wily operator, McCracken is wise enough to know Joshua offered Klitschko too many opportunities and will be working to ensure a less dramatic encounter. Although he will turn 28 in the days before the bout, Joshua remains a work in progress.

The challenger has a relaxed, economic style. To neutralise his two handed output, Joshua will need to pepper him from the outside until his fuel lights begin to blink in the later rounds. Because Pulev, in the twilight of his ‘almost’ career, will relish the same invitation a more aggressive Joshua extends to all his opponents – ‘hit me on the chin’.

Old-fashioned heavyweights don’t need to speak English to do that. 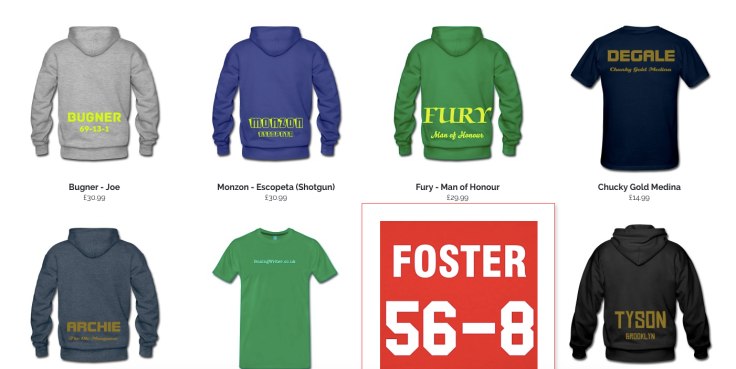