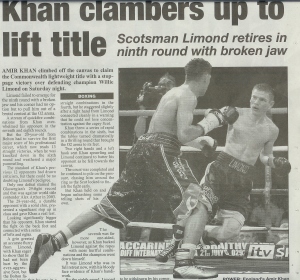 Scottish lightweight Willie Limond, a capable, diligent but oft undervalued performer, will have to wait a little longer for his moment in the spotlight versus Dmitriy Salita at Madison Square Gardens, as the repercussions of Joe Calzaghe’s wrist injury domino through the postponed September fight-card.

Limond, best remembered for decking Amir Khan in their contest a year ago last week before ultimately succumbing in eight rounds to the unbeaten Bolton man, will be stepping up in weight class to the 10 stone division if the fight materialises on the reconvened November card.

Salita, a native of Brooklyn but heralding from the Ukraine is a 2001 New York Golden Gloves winner but remains, arguably at least, an untested fighter with a pristine but shallow 26-0 record. One observer of Salita in action Jimmy O’Pharrow, who runs the Starrett City Boxing club where Dmitriy started as a fresh faced 13 year old, suggested Salita “looks Russian, prays Jewish and fights black”, which informs and baffles in equal measure.

Certain cynics would suggest his earning potential as a Jewish contender has precluded any serious tests from his resume this far, and on face value Limond appears another carefully selected step along that route. Not a career Light-Welter, though he has weighed in as high as 145 pounds for one marking time fight and beaten men who’ve gone on to challenge for the British Light Middleweight belt, Limond is also not a noted puncher as 8 knockouts in 29 victories attests. But Salita is far from unbeatable having been floored more than once in the compilation of his glamorous record.

Despite his history with naturally larger opponents, Limond saw the positive in the delay. Speaking to the Daily Record in Scotland Limond commented: “I’m very disappointed that my fight has been postponed but at least the show will still go on in November,” adding, “The delay also gives me time to prepare more thoroughly for the light-welterweight division. I will be staying in the gym preparing for this fight and working to build myself up and get in shape for the higher weight division.”

In fact, his fight with both Khan and earlier Alex Arthur both represented contests in which the natural size advantages lay with Limond’s opponents and Limond applied himself admirably in both. Salita, tagged ‘Star of David’, certainly spoke with due respect for his Scottish opponent; “Willie Limond is definitely a worthy fighter. He fights hard and has some real skill.”

At 29, these are precious opportunities for Limond and while still the ‘opponent’ in the contest he has a tremendous chance to gatecrash the Light-Welterweight top 10 if he can get the better of Salita in November.

Just reward for a willing fighter and ambitious fighter.