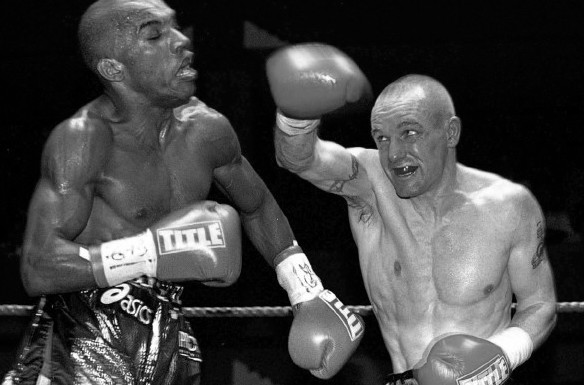 It is a worn analogy to compare boxers with hookers, but for those fighters who eek out a career well beneath the remuneration and spotlight of the bill toppers the cliche undoubtedly has some resonance.

Former British title challenger Alan Bosworth is one such heart on his sleeve puncher who walked away from the sport he’s loved and loathed in equal measure for most of his life. He did so with precious little to show for the sacrifices he’s made to compete. Behind the warmth he extended to me in his home in 2007, lay a bitterness for those who’ve influenced his career directly, and indirectly, and a forgiveable avarice for the opportunity and protection afforded to the sport’s young prospects. It is already more than a year since one of boxing’s grittiest performers retired.

Naturally, star attractions garner the most attention. Like any other business; writing is about supplying demand but in a time of waning public interest when most newspapers have discarded their boxing reporters – the headline is often the only line.

Writing for boxing fans on dedicated providers like TSS offers greater latitude; true Tyson or Pacquiao garner more clicks but fight fans consume enough daily to justify stories about fighters a little further from the top of the bill, whatever their trajectory. Arriving at the Northamptonshire home of veteran British Light-Welterweight contender Alan Bosworth, two weeks before his crossroads clash with Ashley Theophane, I suppressed a feeling of mild surprise at the aspiring affluence of the area. No euphemistic burnt out car, no twitching “hoodies” on the street corner or barking pit bull to report.

As I relayed to a slightly perplexed Alan, not accustomed to too much attention beyond the publicity he generates himself with the local press, I often seek out fighters away from the top of the bill, their stories richer for the fluctuation of fortune. Interviewing the over-interviewed often leaves a hollow feeling, as if the fighter’s sense of self has been lost, in extreme cases they’ve been known to refer to themselves in the third person. In their shadow, deeper down the undercard, a more willing subject exists.

The warmth of the handshake and the heat of the tea bore out this idiom and later proved to reflect Alan’s personality; welcoming and willing but direct and purposeful; “I mean I’m in it for the money, I’ve got two boys, sh– job. I can’t even get a day off. I fought Junior Witter for the British title, they wouldn’t even give me the day off I boxed him.”

Later Alan would reveal, thankfully restoring my faith in the idyllic notion I’d built up about fighters, that it isn’t entirely about the money (though less convincingly that his commentary on forthcoming opponent Ashley Theophane or the prospects of Witter defeating Hatton), but money – as a professional who’s never had a helping hand – and the opportunity it provides for his young family is a driving force. “…and then you hear Junior is, you know, out in Grand Canaria training. Different world. Different world,” Alan adds, regarding his failed attempt to dethrone Junior Witter, the wry smile and shake of the head barely concealing the envy and frustration only a decade of short-notice assignments and self-dependence can nurture.

By the end of the conversation the veil of concealment would be discarded and Alan, his faith in mankind not yet completely extinguished by promoters and boxing’s governing body (of whom he is a vociferous critic), would entrust his animated, heartfelt thoughts on the sport’s leading influencers. In a bid to sustain the last vestiges of that trust, I’ve resisted recording them but asked whether he worried for the sport’s future in fifty years, the 39-year-old who cuts a fit enough figure to believe he would reach his ninetieth, didn’t believe boxing would outlast him. “Nah, nah not a chance. I think it’s still dying. The number of people that speak to me, never boxed, but they watch it and they see who Amir Khan’s fought and they say “What a loada sh–.” And I’ll tell ‘em what do you expect, he’s probably had two weeks notice and he’s got a 50-50 record. These Frank Warren boys, they don’t know they’re born, don’t know they’re f—ing born.”

Alan, though acknowledging that the hardship and isolation of his independence from major promoters has toughened him, making him the hardened professional he is, cannot help voicing resentment. Speaking on the British Boxing Board of Control’s (BBBofC) refusal to accept him as a replacement opponent for Lenny Daws, on a bill in which he was already booked to fight an eliminator with Colin Lynes, Alan grows increasingly animated as he seeks to convey his exasperation at the decision. “I’ve had everything hard, everything hard in this game. Everything f—ing hard. Just me, my sports bag and the train to get there. I’ve had to take on the Magees at two weeks notice, but I’ve knocked out the Downs, a young puncher, I beat Daniel James, 12-1, in a British Eliminator, and before Junior I beat Stephen Smith for the English Title after Down. I’ve mixed in top quality opposition, rarely get stopped and the board said no when Morrison pulled out on Daws! I got the call and I stopped the lorry and went: YES! I’ll f—ing ‘do’ Daws; to myself I said this. They can’t turn me down now I’ve had two wins, alright they were only a 24 second knockout and a 4 x 2s but they’re still wins. The fight is mine, I’m on the undercard in an eliminator. Warren fighters do it all the time, but no, not me. Not f—ing me!”

It’s hard in the company of fighters like Alan to maintain objectivity, to not be engulfed by their passion and personality. An emotional, ‘heart on your sleeve’ subject Alan seemed eager to ensure he retold every injustice or misfortune that had befallen him. Constantly respectful of the professionals he’s encountered, he remains unimpressed by the credentials of Saturday’s opponent Ashley Theophane. “He’s fought a load of losers, he’s never fought anyone with a winning record, they’ve all had bad, bad records. I’ve looked at his record, and….I’m in a bigger league to what he’s been in. On the night I’ll smash him to bits and he might be thinking, looking at me, thinking he’s 39 and thinking I’m old. But I’m very fit for 39, I still spar them young lads and they’re knackered after two rounds.”

Approaching forty, the twice-retired fighter – who drives a tipper truck by day – is fixed on the final chapters of his career. He puts the defeat to Nigel Wright, in a previous British title eliminator, down to a lack of motivation caused by Junior Witter’s persistent presence as champion. Having failed once, he knew the BBBofC would never sanction a second crack. In fact, his comeback from retirement only occurred because Junior belatedly abdicated. “I sat in there, getting fat, drinking beer, pissed off. Then Junior vacated and I thought, I’m making a comeback, there’s nothing (nobody) out there.”

Should Alan prevail against Theophane, and once you’ve spent an hour or two in his company it’s hard to summon a reason why he wouldn’t, the resulting shot at Lenny Daws’ Light-Welterweight title will represent a final full stop on his boxing career. Pointing to his young son, Alan once again spoke from the heart: “I’ve promised these, if I don’t win my next one its over, over then. But if I get through the next one, fight Lenny Daws, the outcome will tell me what I’m gonna do. I’m too old really. I keep myself in shape and what have you, but you’ve got to end it sometime. That would be a great time, British title. If I lose to Lenny that is it, the end. If I don’t beat Lenny, and I believe I can, then I’m going out at the top. I’ve got two boys and they go to school and the lads know I box and I wouldn’t want them seeing me losing every three weeks. I think I’ll beat Lenny, get past this guy here. I’ve got to win, Daws has got to win and then the fight will happen.”

As one of the lead supports to the Junior Witter WBC title fight, the British side of the PPV headlined from Las Vegas by Ricky Hatton, provides a great stage for Alan to take the penultimate step. He’s close now to the kind of closure and remuneration he craves and believes he still needs to know inside himself whether he has it left or not – the heart and will for the fight – the money, to his annoyance, has become too much a of a motivator. Thankfully, he’s aware enough to know his time is approaching and looks to family for direction. His “missus,” as Alan affectionately refers to her, knows it’s close. “She says ‘when it boils down to just doing it for the money it’s the wrong thing to do, I’ll be glad to see you retired.’”

After Saturday, young Ashley Theophane may do too.

For a host of unique, unofficial, unendorsed boxing tribute wear, made to order and shipped within 48 hours visit