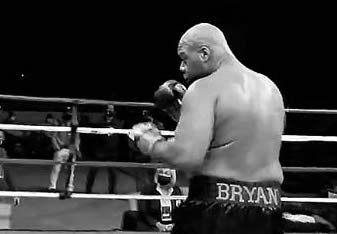 Any publicity is good publicity the proverb insists. Trevor Bryan’s win on Friday night, KO11 v Bermane Stiverne, secured him the most inauspicious of ‘world’ title belts, in a world awash with inauspicious belts, and tested the age-old notion to the fullest. As well as the credibility of all involved.

The days before the fight, usually the key period of promotional push on a PPV card, were spent navigating a labyrinth of nonsense conjured by the Panama based World Boxing Association (WBA). A largely faceless enterprise seemingly inspired by the imagination of Lewis Carroll and harnessed with a move or two from the Lucky Luciano playbook.

Venerable promoter Don King was the unusual Alice in their dystopian wonderland.

The odious shenanigans that enveloped the fight ensured, paradoxically, that Bryan’s accomplishment received wider attention than ever a win over a 42-year-old Bermane Stiverne should afford. As an aside, that Don King could progress from a Thursday morning without a booked venue, a title at stake and a named opponent for the headline act, to a Friday night with all three, further proof of his timeless…..lets go with ingenuity. But I digress.

Principle players in the surrealist comedy were, in no particular order; common sense, the WBA themselves, Don King, and the fighters, originally Manuel Charr and Trevor Bryan, latterly Bryan and Bermane Stiverne and a Puerto Rican pug by the name of Fast Fres Oquendo. For the uninitiated, such is the bewildering speed of Oquendo, no cameraman has managed to capture him fighting on film in more than five years. Inactivity appeared to be a qualifier for participation in the farce, for both the peculiar quartet of heavyweights and their notorious 89-year-old promoter. This was Don King’s first card since 2015.

Common Sense had the fewest lines in the piece and most of those were left on the cutting room floor. Emerging from stage left was 48 year old Fast Fres, a previous custodian of the belt in question, the WBA’s Regular belt, who, despite precious little material to work with, almost stole the show. Think of Danny Glover in Maverick.

Despite the sarcasm that greeted every development of the story and the urgings of all those wearing white stetsons to ignore either the fight, the belt or both, the appeals served only to encourage more attention. The call for no publicity became the very publicity those earnest Sheriffs were determined not to provide.

Piercing the absurdity were two figures. Jake Donovan unravelling the chronology for BoxingScene.com readers, and Trevor Bryan himself who, in interview with Michael Woods, simplified the riddles of the week when asked, just 48 hours before the first bell, who he would be fighting; “Whoever the hell shows up, just bring those gloves!”.

It was hard not to pull for the guy after that.

One wonders, and stay with me here, if the reduction of Manuel Charr to Champion in Recess of a championship that exists subservient to the WBA’s actual world title, to allow two inactive fighters to duke it out for the ‘Regular’ belt, while a previous custodian filed to block the fight on the basis it was still his, may prove an overdue nadir for boxing’s relationship with these belts? It seems impossible to conceive or any further dilution and compromise world championships could be subjected to.

Sadly, cynics will suggest yesterday’s abomination will soon become tomorrow’s normality and in boxing, the cynics are usually right.

Where once stood rankings now stand belts. Joshua, Charr, Bryan and Helenius all now possess a version of the WBA’s Heavyweight championship. That itself only a quarter of the crown Joe Louis held. The sanctioning body that claims a 100 year history has poisoned the sport it presides over with a century of profiteering and opportunism. It displays no integrity nor scruples, and there seems to be no low to which it won’t stoop.

Following the debacle of Friday’s heavyweight ‘title’ and the gnashing of teeth that came with it, an unrepentant WBA subsequently adapted Manny Pacquiao’s status in order to promote Yordenis Ugas behind him. In doing so facilitating a rumoured Ugas v Spence fight and simultaneously liberating Pacquiao to negotiate with Lightweight Ryan Garcia. Both fights will be good for the WBA’s bottom line. I like both fights too, but neither are enhanced by the straps that the victors will wear. Neither need the WBA’s shameless ‘validation’.

Alas, there is no potential for the WBA to be expelled or marginalised from boxing. If the documented revelations about their rankings being available to the highest bidder in the early 80s can be survived, then a fleeting backlash like this is unlikely to derail the gravy train.

Bouts tagged with belts sell tickets, or so those who bemoan their existence are told. In an economic reality where the casual buys more tickets than the hardcore fan, belts fit with a fan’s expectation of the experience they purchase access to. So the revelation Boxing News, the British based publication that began in 1909, is considering the withdrawal of its recognition of the WBA and its belts, along with a scattering of web sites doing the same, is noble, it is unlikely to impact the commercial viability of the organisation.

But, to try is an admirable undertaking. As was Trevor Bryan winning a heavyweight fight on Friday. Congratulations Trevor.