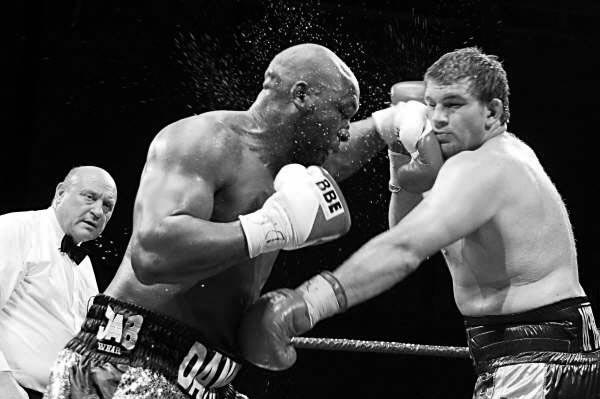 It is now more than 10 years since I began writing here and capturing articles and columns I’d written for the great, good and mediocre platforms that have come, gone and succeeded across print and digital during that time. The words were a little more tangled back then, but they do serve as a wonderful aide memoire for nights I’ve spent at the fights. This piece was a meander through the fight between two of British Heavyweight Boxing’s most recognisable characters; Danny Williams and John McDermott. A controversial affair, fought long before football stadia were the norm and when Leisure Centres were very much the home of British boxing.

Being at the fight is a special experience. True, television coverage offers you multiple camera angles, proximity and the benefit of replays for those crucial moments but no matter how effective your Dolby surround sound is, or crystal clear your high definition LCD presents the pictures, it cannot beat being there.

Danny Williams’ absorbing victory over Big John McDermott last Friday was a classic case in point. The Sky team of Adam Smith and Jim Watt had McDermott clearly winning the bout in their commentary and in doing so illustrated just how subjective scoring a fight can be.

In attendance as a paying fan, as opposed to the more typical press credential access, I watched the fight as a spectacle and didn’t record a score pedantically or take notes on the round-by-round action. This means I cannot revert to a detailed scoring of the fight or reflect and reassess my round by round synopsis of the action beyond my recollections and the instinctive response I felt at the time.

I had Danny winning the fight by a point or so, maybe two, once the various deductions were considered. Big John performed well beyond expectation. I’ve been ringside for many of his formative bouts and this was the most focused and fired up I’ve ever seen him, as well you might expect given the magnitude of the task. It is in this unexpected success that I believe many observers have been misled; Barnsley can hit the post in the semi-final but it doesn’t mean they’ve won the cup.

Glen McCrory, a worthy voice given his own history and achievements in the ring, was encouraged by John’s success too, most notably in the fifth round when he had Danny reeling for over a minute. McCrory went as far as to suggest, “that fifth round when he bashed Danny up was enough to take the British belt”, in an article entitled Friday Fight Night for paymaster Sky Sports. An observation belying McCrory’s usually balanced perspective. The suggestion one round can win you a British title, or any fight for that matter, is so mathematically ludicrous that the counter argument barely requires explanation. Admittedly, Williams could easily have been stopped by referee Dave Parris, but he clung on and never actually ‘touched down’. Miraculous given the loss of coordination he suffered. Still, it was sufficient domination from the challenger to justify a 10-8 round, but whatever the viewer’s permutations of the other rounds victory can not manifest from a solitary 10-8 round. McCrory’s comments strike me as deliberately dramatic, part of the colour he’s employed to bring to commentary perhaps, but ultimatley misleading and unhelpful.

Referee Parris offered Williams more latitude in that round than I’ve seen from a British referee in some time; compatriots Terry O’Connor and Ian John-Lewis would both, one suspects, have intervened. This latitude helped served to soothe some of the Williams camp’s angst regarding the late point deductions for low blows, a push with the forearm and spitting out his gum shield accrued. Again, the sense John was a single clean blow from a stoppage victory connected with supporters and neutrals emotionally, and the apparent injustice of not being able to land that last shot, added further to the melange of frustration those vested in Big John felt.

It is important to remember why Williams was afforded so much ‘rope’ in that fifth session.

Williams earned it in blood, sweat and no few tears in the years previous. Gutsy performances versus Potter, Tyson and Klitschko will all have swirled in Parris’ mind. In victory and defeat, Williams demonstrated durability, stubbornness and grit far beyond that demanded even of prizefighters. The opportunity Parris extended to Williams to cling on to his British title wasn’t lenient officiating, as some would suggest, merely an official employing experience and an understanding of the qualities of the fighter in distress.

For all his other idiosyncrasies and his own rumination on his motivation for being a fighter, once in the trenches the Brixton man has a heart the size of a bath-tub and Parris realised it where others would have acted with more haste. Parris deserves applause, as did Mickey Vann when kicking the towel back out of the ring during Earl v Katsidis last year.

Promoter Frank [Ed – Kellie] Maloney, was incandescent at the decision. Forcefully telling Simon Block, Secretary of the British Boxing Board of Control (BBBofC), off air that the result “was a joke” and the more vociferous McDermott fans packed in to the Goresbrook Leisure Centre voiced their disgust at the verdict. I’d have loved to have asked them the rounds they believed John had won – from recollection I would say the 1st, 5th and maybe one or two of the later rounds when both fighters were regrouping following the monumental fifth –  could be scored with confidence to McDermott. True, many sessions were uneventful, but too often McDermott held and tied up the champion (without a note of warning from referee Dave Parris) to legitimately lay claim to many rounds with any assurance.

Commenting on his own website, Maloney also believed the late deductions swung the fight in McDermott’s favour. They clearly made the decision much closer but they didn’t win him rounds; merely reduced Williams’ aggregate score because in truth, John McDermott – for all his surprising competitiveness – claimed perhaps only 4 or 5 ’10’s’ across the whole 12 rounds. Whether Maloney’s more inflammatory comments regarding the ability of the judges and his suggestion they’d “picked the winner before the fight” will be the subject of scrutiny from the BBBofC remains to be seen.

In closing, the fight ultimately confirmed Danny Williams potential has probably been exhausted and horizons beyond the British title appear theoretical rather than realistic. For the challenger it provided some confirmation of his credentials at British title level and that beneath the mild-mannered, undefined exterior lies a pretty solid heavyweight.

Danny Williams would beat John in a rematch 10 months later by Split Decision. He promised to retire last month, July 2018, following his latest loss to a former Lightweight, Lee McAllister, in a bout not recognised by the BBBofC. The once talented brawler is now 45 and has a recorded ledger of 52-26-0

John McDermott would drop the rematch decision but go on to afford an emerging Tyson Fury, 7-0, a host of problems, losing narrowly, and some thought controversially, in his next fight. He lost a rematch more convincingly the following year. His last bout was in 2013 for the English Heavyweight title, he lost on points to Matt Skelton.