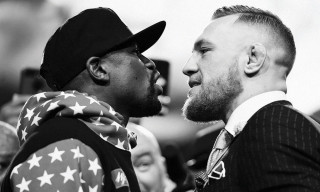 Sponsored Content
While it may seem rather silly to overlook the potentially explosive meeting between Floyd ‘Money’ Mayweather and Connor ‘The Notorious’ McGregor either result will throw up more questions than answers. The biggest questions will undoubtedly be who each man intends to fight next and should McGregor upset the pundits and the Mayweather McGregor odds and come away with victory there will more than likely be a rematch. Should the bookies turn out to be correct and Mayweather come out on top as expected we decided to look at who each of the fighters will attempt to overcome next.
Connor McGregor

Connor McGregor has apparently never ducked out of a potential fight and that’s probably going to be good for him as win or lose, people are going to be throwing themselves at him for a fight as he’s probably the biggest pull in any type of fighting in the world right now. Many people have shot their mouths off in the lead up to this fight and it all depends on McGregor on who he fights next but these are the most likely contenders:
Khabib Nurmagomedov

Khabib Nurmagomedov is the most popular choice for McGregor’s next fight with the Russian MMA fighter being the #1 ranked contender in his weight class. When he’s not wrestling Bears and drinking Vodka, Khabib can be found cowering in a back room struggling to make weight. His well-documented struggles to drop the pounds prior to his previous fight along with his own admission that it was entirely his fault might make this fight a tough one to put together and Connor will probably be a bazillionaire by the time this one is matched up and probably can’t be bothered to mess around with his baggage.
Paulie Malignaggi

I think before we mention this option we should probably say in reality the only person clamouring for this fight is Paulie. Having not fought professionally since his embarrassing loss to Sam Eggington and not fought anyone worth fighting since he lost 3 out of 4 fights against Adrien Broner, Danny Garcia, Shawn Porter and Zab Judah (He beat Zab, the same Judah who was beaten by ‘Glass-Chin’ Khan). Paulie was completely shown up in sparring, even with McGregor’s average (at best) work, putting the New York native onto the canvas several times. Paulie has Dollar signs in his eyes and don’t be surprised to hear him talking unreal amounts of BS before and after the fight to try and tempt Connor to give him a pay day.
Winner of Tony Ferguson Vs Kevin Lee

Whilst the fans crave the match against Khabib and Paulie craves his shot the most likely option for McGregor will be this one. Should he fancy stepping back into the octagon following his foray onto the canvas he could attempt to unify his Lightweight Title with a fight against the winner of this match-up. He hasn’t competed in the UFC since he sparked Eddie Alvarez out in in November 2016 so could ring rust play a part?
Floyd Mayweather

By the time Floyd fights McGregor he will have almost gone 2 years without a fight in his self-imposed exile of retirement. He’s always been desperate to get to 50-0 and it’s unlikely, should he win, that he will continue to fight. The extraordinary numbers quoted in the run up to this fight in terms of how much each of the fighters will earn will surely mean Floyd, if he isn’t already, will be made for life. We’ve decided to have a think anyway and these are the people we think Floyd should fight next (even though he probably, almost definitely, won’t).
Amir Khan

Amir Khan has practically been on his knee’s praying to the boxing gods for a fight with either Manny Pacquiao or Floyd for years and years to no success. He hasn’t helped himself with attempting to step up in weight to challenge Canelo, who swiftly sparked him out. To be fair to Khan he probably stands a good change against Mayweather as he’s usually winning on points before his glass chin is exposed. Floyd isn’t a heavy hitter so Khan would be an interesting prospect.
Errol Spence Jr.

After his recent win over Kell Brook, Errol Spence has jumped up the ladder and is seriously being considered as an heir to Mayweathers P4P crown. A fight between Spence and Mayweather could be likened to the Klitchko Vs Joshua fight, the young pup taking on the old dog to see if they still have anything left in the tank.
Mikey Garcia

Fresh from out-pointing Mayweather’s trash-talking heir apparent in Adrien Broner, Mikey Garcia could and should be looking for a fight with Mayweather. He’s 37-0 and a classy elusive fighter who carries some power. Looking through his past list of opponents there aren’t many to pick out though, with Broner being the pick of the bunch by a long way. Floyd might take the fight on that fact and Mikey could make him regret that choice, but who are we kidding?
Mayweather is going to ride off into the sunset in his convoy of solid gold Bugatti Veyrons, wiping his bum with $20 bills and living the high life for the rest of his days.

For odds on the fight visit www.betfair.com