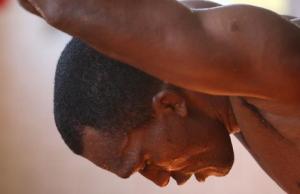 Debate about the substance of Joe Calzaghe’s career will enthrall boxing fans for decades to come, his standing will ebb and flow with the passage of time and in all likelihood forever divide opinion thus – he was an all-time great who dominated his division for 10 years or, alternatively, he was a great fighter with a weak resume who ‘cherry-picked’ his way to retirement. When I look back on his career as Donald McRae in-depth interview with Calzaghe for Boxing News encouraged me to this morning, I don’t point to the Lacy fight, the Kessler war or the Hopkins victory as the night or nights which define Joe the fighter, nor do they provide helpful synopsis of his career. I think for so many reasons his brawl with Cameroon-born Australian hard man Sakio Bika epitomised his career more than any other single fight.

The 2006 defence was Calzaghe’s first assignment following his break-out unification fight with Jeff Lacy. A performance that lifted Calzaghe’s international reputation, or to be blunt, reputation in America to an unprecedented high. He out-boxed, out-worked and out-thought the plodding IBF champion who would never be the same fighter again. Calzaghe broke Lacy down so completely, every attempt to rebuild him has left the architects of his return with an incomplete product. It was impervious, ruthless and despite lacking the type of ‘highlight reel’ knockout the You Tube generation feast upon, it proved a chilling display.

This breakthrough, coming as it did so late in Joe’s career was presumed to lead to cash-rich clashes with the other PPV names of the time; Hopkins, Taylor, Pavlik and Tarver not to mention European options in Abraham or Kessler. The world wanted Calzaghe in high-profile contests and already in his mid-thirties, it was presumed so did Joe.

Instead, like Evans Ashira before Lacy, Calzaghe and Frank Warren opted for the more blue-collar option of Sakio Bika for Calzaghe’s HBO debut. A fighter who would prove harder to repel than expected and demanded qualities Calzaghe didn’t need to call upon in the Lacy clash or likely, in any fights before or since.

On any criteria Sakio Bika was an unsatisfactory opponent. An accusation levelled at many of the foes Calzaghe was booked to face during his tenancy as the WBO Super-Middleweight champion and once partially conceded in the interview published today. True Bika was big, strong and rugged but his 20-1-2 record was largely compiled on the Australian and Japanese circuits and included only two opponents of international significance: Sam Soliman, the gutsy Australian, who beat Bika by majority decision in his first venture past six rounds and in the fight preceding the Calzaghe contest, Markus Beyer who sustained a fight stopping cut and left Bika with a technical draw on his record.

In short, he was barely qualified to tackle a fighter as rounded, renown and in-form as Calzaghe was in 2006.  Despite those shortcomings he proved to be the type of nightmare opponent few champions relish tackling. Calzaghe’s previously suppressed penchant for showboating made its debut – ill-timed bravado clearly stirred by the presence of HBO cameras but abjectly failing in its bid to belittle and deter Bika. History will record the showmanship didn’t improve with practice either when the moves were repeated against Roy Jones three years later. It merely served to embarrass the champion, feeling as it did to those in attendance akin to watching a middle-age uncle dancing at a wedding.

When a boxer of greater talent in effect chooses to play around with an opponent it invites problems, such as getting hit on the chin

Graham Houston at FightWriter.com in 2006

Bika continued to bore in with his head, throwing everything he had at everything Calzaghe left within reach and sight. The giant Australian appeared to grow in dimension, his ripped torso a physical manifestation of his intent and drive. It was impossible to totally admonish Bika for his rugged approach. Considering the disparity in pedigree and experience, Bika adopted the only strategy available to him – force Calzaghe back and drag him into a brawl where the Welshman’s advantages would be less important. Calzaghe seemed to shrink, his misplaced bravado left him open to shots and though always more successful in exchanges, Bika’s shots carried weight and ruffled the usually composed champion. A clash of heads opened up a cut in the fourth and Calzaghe’s HBO debut lurched from the disappointing to the downright dangerous.

Michael Woods at thesweetscience.com in 2006

Despite the unsatisfactory clash of styles, particularly given the showcase for American viewers the contest was meant to represent, Calzaghe conjured qualities all greats must at some point summon. He accepted the fight would be an ugly contest and sought to find ways to maintain his advantage. It was a sapping, draining fight, one Calzaghe fought with blood dripping from his eye for 8 long rounds. He emerged victorious against a younger, fitter, stronger opponent in a fight more suited to the challenger. It was ugly to witness. But it demonstrated Calzaghe was able to win a different type of fight, that he could out-last a fresher opponent and he could make adjustments to prevail. It was the antipathy of the Lacy performance, yet to my mind, no less meaningful.

This weekend, the now 31-year-old Bika has a marvellous opportunity to re-position himself for a shot at the IBF champion Lucian Bute if he can overcome another unbeaten Super-Middleweight Jean-Paul Mendy. In an echo from the past, Mendy arrives at the eliminator bout with a pretty record of questionable substance. At 36 he is already a veteran and his best performance, a draw with Anthony Hamshaw who subsequently lost to a regrouping Roy Jones and a streaking Andre Dirrell in 2008, is not the stuff of legend.

The reason he hasn’t got fights is people have avoided him. It’s important people know it’s not because of greed, it’s because people have been ducking him.

At 5-11 and, like Calzaghe, a southpaw Mendy will doubtless have studied the Calzaghe v Bika tape for insight as to how the scrap may unravel this weekend. If he has, he will realise that no amount of Amateur credentials, Mendy was on the 1996 French Olympic team but lost out to Sven Ottke, or ring craftsmanship will prove sufficient in isolation. Mendy will need the stomach for a rough fight and a prodigious work-rate to suppress Bika’s will and strength. The best have done it, I’m not so sure the Frenchman is in the league of either Bute and Calzaghe.

If my suspicion is correct, Bika will be well placed to ruffle yet more feathers among the Super-Middleweight elite by this time on Monday – if any of them emerge from the Super Six tournament with the appetite for an opponent of Bika’s type of course. The most likely outcome is an Autumn rematch with Lucian Bute who, like Calzaghe before him, is in urgent need of some credibility and victories of consequence on his resume.

Bute may find it in an unlikely source in Sakio Bika. Few fighters have the desire to fight Bika twice after all.

One thought on “Boxing: Sakio Bika, a ghost from Calzaghe’s past returns to the fore”