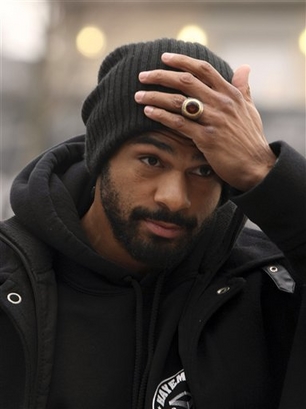 I’m not sure of the exact wording of the urban myth, the one which declares you are never more than a few feet from a rat, whether it be London, New York or the sport of boxing, like most of these myths there is, somewhere, an origin in fact. David Haye’s withdrawal from the biggest heavyweight fight since Lewis v Tyson because of an, as yet, unqualified and unquantified injury has caused a typically hysterical reaction among boxing fans, only Mohammad Al Fayed does conspiracy theories as well as boxing fans, and the hunt for the rat in the story is on.  UPDATE: Adam Booth claims Haye is hopeful of a re-arranged July date. Source: The Sun

The story first broke on Setanta.com, the TV network providing the only pay-check Haye was permitted in his subordinate role in the potentially record breaking promotion, and a network with major financial problems. As renowned pundit Steve Bunce stated in interview with the Setanta News team yesterday, nobody had heard whisper of any problem with Haye’s health. There had been no preceding rumours beyond the subjective commentary that Haye was lighter than anticipated for the showdown with the giant Ukrainian. As recently as Tuesday evening circulars from Haye’s various social network sites were continuing to promote the fight. The injury therefore has been kept unprecedentedly secret or has very suddenly occurred.

Keen to salvage the event, 55,000 people are expected to attend on the 20th, Klitschko’s team are believed to be negotiating with the jilted WBA pair Ruslan Chagaev and Nicolay Valuev. Neither will appeal to the large British contingent though both would provide stiffer competition than the next best British options of Danny Williams or Michael Sprott, the latter of which is mentioned more because of his recent sparring duties with Klitschko than any form or global recognition.

Veteran American Cedric Boswell is on the under card and would offer a routine fixture theoretically, and one not physically too dissimilar to Haye, a factor which must be a consideration. Would the naturally cautious younger Klitschko really tackle Nicolay Valuev having trained and prepared for a 6-3, 215 pound quick opponent? It seems ludicrous particularly as in its own right that fight has some significant potential to sell.

Haye was a voluntary defence ahead of Klitschko’s mandated encounter with Alexander Povetkin, a bout which must be contested by September and it is hard to surmise a scenario where a short postponement – creating a July Haye fight – could be accommodated if the Povetkin fight is forced before September. A payment to Povetkin or negotiation with the sanctioning body would presumably be required. I actually think Haye could be forced out of the immediate fixture list and need to fight a contender, something it is important to remember he hasn’t yet done, to freshen up his credentials and rebuild faith in his reliability.

If Haye has been forced to take a figurative knee because of the documented financial precipice Setanta is stood upon, he has my sympathy – despite the riches and respect victory would bring – nobody could expect Haye to tackle Klitschko without guaranteed payment.  Setanta has recently defaulted on payment to the Scottish Premier League and has failed to raise the credit they require to fulfil their existing obligations, it isn’t therefore hard to conclude Haye may be nervous of his wages actually being paid. Certainly nervous enough for any injury which could reduce his chances, even minimally, becoming a show stopper at this stage.

Today’s 2pm (GMT) show on Setanta, The Steve Bunce Boxing Hour, could illuminate fans a little more. The network, and the fighter have obligations to offer fans who will ALL be out of pocket to one degree or another, some information on why he’s elected to withdraw.