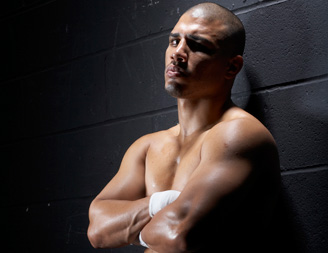 It is a while since I’ve perched on the end of the sofa to watch a fight, a while since I’ve felt the rush of a heart-felt connection to a fighter but on Saturday night, as 31-year-old Michael Jennings strode to the ring, that familiar surge of anxiety raced through me. I recall this was a feeling I had when Frank Bruno retreated toward the ring for his rematch with Tyson and I felt it when Dennis Andries kept rising from the canvas against Thomas Hearns. When Brian Hughes asked between the 4th and 5th rounds if the twice floored Jennings was okay, Mick’s response of “Sound, yeh” it just warmed this fan’s heart a little more.

He isn’t flash, he isn’t a knockout artist or a limbo dancer as so many crowd pleasers are these days. He’s unspectacular. He’s not fearsome, he doesn’t have rocket speed of foot or hand. He’s isn’t awkward or either rangy or a short powerhouse. He’s good at everything, and has developed over a 10 year career all the old fashioned fundamentals. Good high hands, a nice double jab, decent lateral movement and he is always fit for the distance. In short, and to use the local colocialism Jennings did, as a fighter he’s “Sound”. Unfortunately, sound doesn’t get you close to beating world-class fighters.

It got Jennings close enough to get stopped by one but never truly likely to overcome one, but the sight of his name in lights at one of boxing’s great arenas will live with him forever. I am pleased he had sufficient faith in his ability to construct a fight plan – box from the outside for the first six rounds and see what reserves the presumed to be weight drained Cotto has left. Many on the forums have criticised Jennings for not simply, “having a go”, a theory instructed by the hindsight of seeing his plan cut short in the 5th. True, Jennings rarely engaged toe-to-toe and with the fight terminated early it is possible to regret, on Jennings behalf, not trying to sit on his punches and trade with Cotto. Churlish nonsense in my opinion.

Jennings afforded the opponent, the opportunity and his own strengths more respect than that. He approached it with enough confidence to believe a distance fight was his best case scenario for snatching an unlikely victory. To have wasted the opportunity with an ‘all or nothing’ attitude considering the respective knockout ratios of the two fighters  would have been futile and idiotic. I applaud the view he took and too, the one taken by the referee who clearly saw the look of resignation in Jennings eyes when he rose at 9 of his third count. The always sensitive, and vastly experienced Bryan Hughes would likely have not let Jennings emerge for the sixth had his charge made it to the end of the fifth anyway.

For Cotto the future looks Sugar coated, as Margarito’s suspension not only throws a shadow over Cotto’s loss to the Mexican but rules out the planned summer rematch. Shane Mosley, who Cotto has already beaten once, looks entirely likely as his next opponent. It will once more bring together Top Rank and Golden Boy Promotions but it would help further build up one of them as the division’s number one and if that could prove to be Cotto, the younger of the two, the spectre of a Mayweather return has another prompt to add to the winner of Hatton v Pacquiao in May.

Jennings meanwhile will return to domestic business and one would hope, either a British title shot or a run at the European belt he should have been pursuing long before now – though of course, if he had, his WBO #2 status would never have materialised.