The astonishing performances of Jamaican sprinter Usain Bolt broke the consciousness of almost the entire population of the world this week. Only the Olympics and perhaps the football World Cup offer such global exposure [alas the heavyweight championship has long lost this broad appeal], and though I doubt he could run backwards as fast as his contemporaries in the Olympic boxing ring, the question of his place amongst the greats of the track is unquestionable. The clock doesn’t lie. Bolt is faster than anyone who ever lived. Such cross generation comparison in boxing, provides no such clarity.

In his triumphant run in the 100m, Bolt clocked 9.69 despite affording himself the luxury of impersonating David Pleat’s famous victory jig over the last five strides. His predecessors, the stand-out sprinters of their respective generations, would trail behind him were they to compete in the same race and deliver their personal bests; 1. Bolt 9.69 2. Greene 9.79 3. Lewis 9.86 4. Christie 9.87 5. Hines 9.95 with Jesse Owens lagging behind in 10.2.

You can’t argue with the cold hard facts. In a race to determine the fastest, with no variables of points, judges, weight, home advantage, styles or officiating the clock is the sole arbitor. Bolt is the greatest sprinter of all time. Try to apply equally quantifiable statistical criteria to the world of boxing and you will come unstuck. Career records are essentially useless. Does Marciano’s 49-0 mean more or less than Ali’s 56-5? Could you realistically compare Mayweather’s 39-0 with fellow multi-weight champion Henry Armstrong‘s 149-21-10 slate?

Perhaps, the accumulation of titles could provide illumination in the debate? Well hardly. Can a world title belt awarded rather than won, like Lovemore N’Dou’s IBF Light-Welterweight belt make his career more worthy than Herol Graham who never won one? Frankly no. 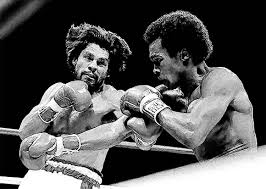 Does Sugar Ray Leonard double weight title victory over Donny Lalonde really actually mean anything? And would any accumulation of belts, with four major sanctioning bodies and a multitude of thinly divided weight classes really represent a greater achievement than Monzon or Hagler’s  monastic reigns at middleweight? I don’t think so.

Imagine, if you will how reverential we would need to be were Homicide Hank [Henry Armstrong mentioned above] an active fighter today, he simultaneously held the 9 stone, 9 stone 9 and 10 stone 7 titles. Not single belts in a fractured picture, but the actual, one and only unmistakable genuine world title and he lost 21 times.

Despite or, perhaps, because of these intangibles boxing fans find comparing fighters across generations a temptation they’re unilaterally unable to resist. Endless pubs, water-coolers and Internet forums host fiercely contested debate on mouth-watering mythical match-ups. Who would prevail had Ezzard Charles and Bob Foster co-existed, or who would have triumphed had Joe Louis’ and Mike Tyson’s careers overlapped? Nobody could ever be sure and thats just the way boxing fans like it.

Give a boxing fan the podium in any discussion on the greatest sprinter of all time and he would, by training, look beyond the obvious benchmark of time. He’d probably suggest Jesse Owens was the greatest, having run 10.2 without the advanced track surfaces on which the Beijing Olympics have been hosted, he would venture that his victory in 1936 in Germany represented a run far more meaningful than Bolt’s as it carried social and political significance.

In fact, I’m sure a boxing fan would plump for Owens. Both Ali and Louis are remembered more fondly than many of their rivals because of just such non-boxing events. Louis’ triumph over Max Schmeling was awash with racial and nationalistic overtones and Ali’s stance on civil rights and the war in Vietnam contributed to the regard with he is now held. This, to many, overshadows their weaknesses and ultimately, their defeats.

Other boxing fans would probably point to Carl Lewis as the greatest, he could after all lay claim to gold in the long-jump discipline too. Carl Lewis would have appealed to those advocates of Charles or Robinson or Hearns, all of whom excelled in multiple divisions.And among the shadows would be those who’d point to Frankie Fredericks, the glowing star of Namibia, a scarcely populated African nation, as the true great because he emerged without the backing of a major western nation, and remained competitive across 100 and 200m for a decade. Fredericks, they would argue, was simply unfortunate to be competing in an era of Johnson, Lewis, Christie and Burell. Fredericks would have been the Sam Langford or Herol Graham candidate.

I think I prefer the debate. I can’t imagine standing over a pint and saying; “Marciano was the best heavyweight ever”.

Visit www.boxingwriter.spreadshirt.net for a range of unique tribute wear to the greats of boxing, past and present, or click the image below.

One thought on “Boxing: Usain Bolt, Muhammad Ali and the impossible comparison”