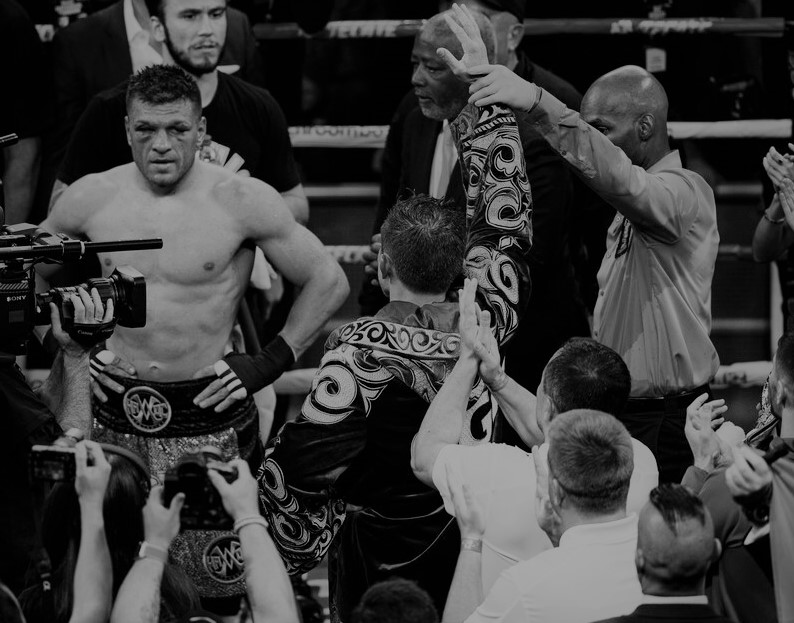 As I lay here in the post summer funk of early October, rendered motionless by fatigue and the bleakness of an approaching Winter bellowing at the windows of my afternoon, rumination is often a friend and occasionally a foe too. For reflection too easily cedes to the creep of melancholy.

The transition between seasons is a blustery reminder that the world keeps turning and the clock keeps ticking. Leaves swirl and dance on the driveway outside, like discarded ticker tape from a parade long since passed. The terror of middle-age visits us all.

Watching Gennidy Golovkin wrestle with the Autumn leaves of his golden summer as boxing’s preeminent middleweight it was hard not to draw a wry, knowing smile. Despite his ultimate success aged 37, he defeated Sergei Derevyanchenko via unanimous decision, the revelation that he is no more impervious to decline than the rest of us is both a comfort and a sadness.

This unwelcome truth did for Ali, Robinson and Louis, just as it did for Keith from Accounts when he gave up five-a-side football on Thursdays.

Father time, as cliché insists, never loses. Although gym rats whisper of a Welter out of Philly in ’58 who pushed him close…..but I digress.

Thankfully, my career, if the descriptive isn’t too salient and precise a term for such an uncurated quarter century in the working world, isn’t the time sensitive beast prizefighters contend with. Nor, at 46, would there be much resolution to be found in the ring were I reflecting as a former fighter or contemplating how to resolve the pangs of regret.

With apologies to Bernard, George and more topically, Nigel of course.

Fighters really do have to focus. In an era in which fighters of championship level box twice a year, such is the remuneration available to them, and fighters being ‘paid’ is something we should all embrace, there is little latitude for defeat or soft touches in the quest to fulfil potential and achieve that most elusive feeling of completion. Golovkin has achieved an enormous amount in his professional life but, at the age of 37, has precious little time left to ensure he has squeezed every ounce from his talent and opportunity.

I was therefore happy to read he has begun to concede to himself, and the wider public, that the third fight with Saul Alvarez he so craved will probably never happen. The pursuit could distract from the challenges that remain within his dominion.  Despite their shared television network and the money the fight would generate, Canelo’s move to Super-Middleweight, temporarily, and now beyond that to Light-Heavyweight insists, rather than suggests, a return to the 160lb limit is now a fanciful notion. And therefore, squashes the hopes of a definitive trilogy fight unless Golovkin ventures beyond the middleweight division himself.

The draw and defeat Golovkin took from their first two fights are the type of outcomes that can eat away at a man in the retirement that lays ahead, destroy the peace his accomplishments ought to provide him once he hangs up the gloves. He will, I believe, have to settle for the more transient confirmation provided by public opinion on those two bouts. A win, and a contentious defeat. A share of the spoils. Though the record books, that binary narrative fighters can never escape, will remain undisturbed.

Much has been made of the performance versus Derevyanchenko, and the consensus conclusion – that Golovkin is a fading force – is hard to eschew in light of the type of statistics put forward by BoxStat. Armchair matchmakers insist he should now be matched more shrewdly and in keeping with his veteran status and presumably, with one eye on avoiding a defeat that would scupper any linger hope of a redemptive trilogy fight with Canelo. To avoid opponents like Billy Joe Saunders and Demetrius Andrade to preserve a fight which may never occur is a skewed logic despite the inherent problems younger, fresher, awkward fighters will likely pose.

To diminish Golovkin in this way insults not only his brilliance but it is a betrayal of the principles all fans demand from their heroes. The best fighting the best. I implore Golovkin to continue making tough fights and to seek further records and dominance at middleweight. For the contentment those armchair fans presume can only be found in beating Canelo by knockout or in the eyes of three judges may always lay beyond his grasp, to compound that by fighting hand-picked opponents until retirement would insult Golovkin and the sport itself.

When the Autumn leaves of his career give way to the Winter of retirement, Golovkin deserves to be remembered for the things he did, for his own career, not as an asterisk to someone else’s.