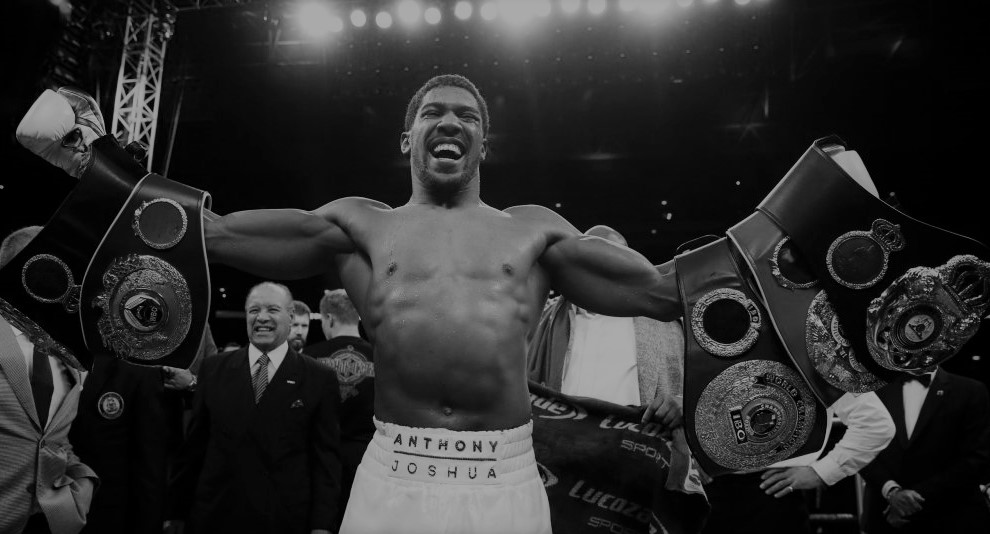 “The struggle is my life.”

Accepted wisdom proposes that heavyweight boxing is in rude health.  The simultaneous primes of Deontay Wilder, the WBC’S champion, Anthony Joshua, recognised by the WBO, IBF and WBA and Tyson Fury, the somewhat contested custodian of the lineal championship offer the promise of a new golden age.

Were there a PowerPoint presentation to pitch this notion to investors, it would suggest, repeatedly, that Heavyweight boxing is stronger now than it has been at any other point in the past 20 years.

Graphs, pie charts and slick video clips of vast crowds and packed football stadiums  would be used to convince the doubting audience. And boxing wouldn’t be short of salesman capable of taking up this thread, but as a summary of the sport’s blue ribbon division, it does host an obvious omission.
The distinguishing feature between this would-be golden age and it’s supposedly exemplary predecessors of Holyfield, Lewis and Tyson, is the lack of fights between the three ‘kings’. The absence of these fights is indicative of the multiple sanctioning body era and the bunker mentality that engulfs those busily over-protecting their fighters.  Unwittingly, it also reveals a lack of precision in our own collective nostalgia too.

After all, there were caveats to all of the fights between Lennox Lewis and his contemporaries and both he and Tyson never tangled with Riddick Bowe, the fourth leg of the famous 1990’s foursome. But I digress.

Regardless of the slight revisionism about mess’s Holyfield, Tyson, Lewis and Bowe contained in the popular comparison, there is no escaping the bitter reality of today; Fury, Wilder and Joshua simply aren’t fighting each other.

A meeting with WBC champion Wilder would provide Joshua – 1/33 to beat Andy Ruiz Jnr. this weekend in the boxing betting with Betway, – a chance to fulfil his long-term goal of becoming the undisputed world champion. Acquiring the WBC belt has proven extremely difficult for the 2012 Olympic gold medallist, though a fighter less fearful of defeat, and what that might mean to his long-term business plan, may have snatched at the offers Wilder’s backers have reportedly extended.

However, there are now more obstacles involved in winning multiple titles and organising mega-fights than ever before, if we can assuage our reservations about the paradoxical existence of multiple ‘world’ titles long enough to indulge the narrative.

Negotiations between Eddie Hearn and Shelley Finkel – who manages Wilder – have become public and personal over the past two years, with Hearn referring derogatively to his counterpart as ‘Shirley Winkle’ on several occasions.

It’s quite common for long-held grudges between promoters, who have often been in the sport for decades, to jeopardise fights.

The financial benefits of staging a contest – namely a greater share of pay-per-view and ticket revenue, and the ability to secure sponsorship deals on top of that – are a clear incentive for promoters to do all they can to capture the ‘rights’.

They can also then typically determine,  where the fight will be staged, the size of the ring and even minor details like which fighter will take which dressing room. As Frank Warren has stated many times; “I always try to get home advantage for my fighters.” The key word being advantage. In any sport at the elite level, the margins between triumph and disaster are often miniscule. Details matter.

Boxing agent Tim Rickson, whose clients include former British and Commonwealth middleweight champion Tommy Langford, says promoters unwilling to cede ground to their rivals can also get in the way of their own fighters’ interests.

“It’s business, but ego is certainly part of the equation,” says Rickson, “That sense of power play comes into it, where each are trying to be the biggest promoter with the biggest backing and the biggest fanbase.

“Often the fighter is willing but there is conflict in the promoters’ interests – and now the bigger problem, which is the TV broadcast deals – can result in the fight not being made.”

Indeed, the broadcasting boom, with a revolution in the way we consume content and TV in full flight and the arrival of new viewing platforms, creates ever more obstacles to the  super-fights fans crave and the sport’s oft-obscured meritocracy requires and should demand.

The advent of these new platforms has forced a recalibration of the broadcasting hierarchy and a battle for the sport’s principle assets. Increasingly, networks, whether the established, like Showtime or ESPN, or new entrants like DAZN, are trying to sign fighters to exclusive contracts. It is making young men wealthy, but it is creating a ‘bunker’ effect that prevents fights being made and starves fans, new and old, of the excitement and electricity of the best fighting the best.

In February 2019, Tyson Fury signed a five-fight, £80m American broadcasting contract with ESPN, following in the footsteps of Joshua and Wilder, who have similarly valuable deals with DAZN and Showtime, respectively. Though in Wilder’s case, less restrictively so.

With the big three now all tied up with separate stations, negotiations look close to unworkable.

“It’s so fragmented, it’s just going to be extremely difficult to bring any of two of those three together,” suggests Rickson.

“If you’re ESPN and you’ve put £80m into a fighter, you’re not going to let him have a rematch with Deontay Wilder on Showtime.

“Will ESPN say they will step down to let Showtime put it on, or vice versa? No.

As Barry Hearn, the veteran promoter who first built Matchroom Boxing in the 1980s, said in interview with the BBC recently, “It may come down to ‘who blinks first’, it might be us, I don’t think it will be, but it might be!”

When Floyd Mayweather fought Manny Pacquiao in 2015, for example, HBO and Showtime aired the bout as a joint production – the first collaboration between the networks since 2002 when the Lennox Lewis v Mike Tyson fight was belatedly made.

That is always the risk with super-fights. The sheer scope and scale of negotiations that must take place can push the event further and further down the line, until its relevancy is lessened.

Allowing the hype around a fight to build does increase its financial potential, and allows fighters like Joshua and Wilder, for example, to remain undefeated for longer and earn well in the meantime.

The first is mandatory challengers.

Sanctioning bodies can rule that their top-ranked challengers have earned a shot at the title, forcing a champion like Joshua to defend one of his belts, rather than seek to fight for a new one.

Put these defences off, and the champion will be stripped. It is this inconvenient truth that will almost certainly mandate that Joshua fights Kubrat Pulev later this year, or risk losing his IBF belt.

The second is sheer dumb luck.

You simply can’t legislate for injuries, or opponents failing drug tests that force them out of fights, or worse still, a fighter benefitting from undetected Performance Enhancing Drugs, and beating the attraction.

That’s something Joshua and Hearn have had to deal with. Jarrell Miller – who was meant to be the opponent on 1 June, tested positive for three banned substances and had to be replaced.

There’s also the chance that the opponent they have been eyeing for months will lose before a deal is done, a fate Joshua nearly suffered in December 2018 when Wilder scraped a draw against Tyson Fury.

Should Wilder’s rematch with Fury go ahead before Joshua gets his hands on the WBC champion, there’s a good chance it will be the Gypsy King – not Wilder – that he must beat to win that final belt.

That would require Hearn to negotiate with British rival Frank Warren, with whom he is even less likely to strike a deal than Finkel.

Or, as happened to Tyson with Douglas, Lewis with McCall and Rahman and very nearly Holyfield with the unfancied Smokin’ Bert Cooper……Joshua could just lose.

One thought on “Joshua and the pursuit of undisputed”