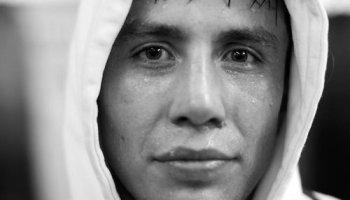 Every mans got to figure to get beat sometime

The weekend super-fight between Gennady ‘GGG’ Golovkin and Saul ‘Canelo’ Alvarez from the T-Mobile Arena, Las Vegas, returns boxing to the bosom of those who embrace it through the good times and the bad. A type of ardent disciple that nods and purses lips at the mention of James Toney or smiles and rub his or her hands together at the memory of Smokin’ Bert Cooper or Paul ‘Scrap Iron’ Ryan.

For a week or two this summer, maybe longer, those type of fans lost custody of the sport to the ‘casual’. Those event-fans became the key audience for veteran Floyd Mayweather’s lucrative entanglement with mixed martial artist, Connor McGregor in a carnival that created the biggest purse ever to be split between two fighters.

It was raucous, magnetic and at times out of control despite the barely concealed exhibition the fight would always be and the purely commercial opportunism it was borne from. My own love of boxing had thankfully evolved sufficiently to enable me to enjoy the contest for what it was, fun. I didn’t worry too much about the injustice of bygone greats dying penniless whilst a modern-day grappler could earn $100 million on his boxing debut. Protecting boxing’s virtue is a type of myopic fundamentalism for which I have neither the inclination nor energy to engage in.

My journey through boxing began as a small boy fascinated by the black and white world of Joe Louis and Tiger Flowers depicted in three particularly special boxing books. All three their with dust covers removed and protective plastic applied.  I would visit those books, slide them forward, trying hard not to wake the slumbering neighbours Burns and Kipling, and sink into the pristine ruby-red armchair of the late Grandfather who left them there. It became a type of pilgrimage and I suspect his passing, at a formative age for me, embedded my love for boxing more deeply than my Grandfather may have had inclination to do in life.

Certainly, at the moments I’ve looked up from ringside seats I’ve earned from the coverage I was willing to offer the sport for free, my first thought was always of him. I’d picture that same ‘book shelf’ room, his ageing coal miner’s hands clutching a battery-powered wireless or sitting in the arm chair, tea in hand, watching Ali on a tiny black and white portable television. I’d hope he’d approve of where I was and acknowledge I’d heeded his regular advice “to use that” dabbing at his temple, “not that” touching his arm, “because that will wear out, and that won’t“.

I don’t imagine he would have been complimentary about the Mayweather v McGregor fight but I like to think he would have pointed me to Archie Moore, one of the greatest Light-Heavyweights of all time, who fought more than one wrestler making their boxing debut and recalled too, the farcical image of his Greatest of All Time staring down at Antonio Inoki, a professional wrestler, from the same pedestal he’d first climbed to goad Sonny Liston.

Following the media and financial gorge of last month, boxing, as a living breathing thing, has its own pilgrimage to make this Saturday. Returning to one of its greatest, most iconic assets; a middleweight title fight. On Saturday, the champion with cement in his gloves that will be played by Gennady Golovkin [37-0 (33), and his number one contender, a flame-haired Mexican called Saul Alvarez [49-1-1 (34)], will offer a testing opponent.

Despite the brilliance of the two competitors and the irrefutable authenticity of the match, it will not reach the popularist zenith achieved by McGregor and Mayweather.

It will be a better fight though.  And if it reaches the heights of those classic touchstone contests of the 1980s, when Hagler fought Duran, Hearns and Leonard and filled the vacuum left by the aforementioned Ali, it may yet carve both fighter’s name into boxing legend.

Legends, after all, are never determined by the vastness of their bank account or the purses they receive, or necessarily, even whether they win or lose, but more, what they are willing to give, to sacrifice.

Those who rely on ‘that‘ and not ‘that‘, may become worn out Grandad, but they, like you, are never forgotten.