I feel vindicated in picking Nate Campbell to prevail in this encounter despite flying in the face of popular opinion and more crucially, that the fight didn’t actually take place. However, I did comment that Guzman was not a safe pick. Despite his unbeaten record, he had a patchy level of activity and often jumped from championship bouts to magically appear a division higher.

I had no inclination Guzman was struggling to limbo beneath 135 pounds, everyone assumed – given he’d jumped to the division rather than defend at 130 versus Alex Arthur – that he would make the new limit with relative comfort. It reflects badly on his 10 months of inactivity and his curios status as a pound for pound outsider, despite failing to establish himself in any particular division for the best part of 5 years.

Where Guzman goes from here is hard to predict. One assumes a hastily made match in the next month or two would find him able to make 135, having gotten down to 138 after a long lay-off. He isn’t without precedent in missing the Lightweight limit in recent years, both Castillo and Corrales had their high-profile moments on the scales too but future contracts will be heavily loaded with weight-making clauses.

It would be hard to fathom if Lightweight is already a division the 32-year old Dominican cannot make, the Campbell fight would have been his debut, but Guzman has history as a weight-class jumper and usually with curious timing. If that is the case, Guzman heads up to the sparse surroundings of Light-Welter, and joins the race to face Ricky Hatton, the division’s big cash-cow. 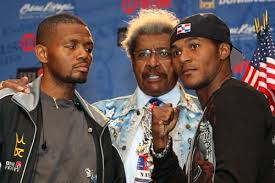 Hatton is unlikely to be eager, having witnessed Guzman’s elusiveness in contract negotiations with Alex Arthur and before him Scott Harrison. Guzman’s failure to make weight throws new light on the ‘visa’ problems espoused as the reason for the collapse of his WBO Super-Featherweight clash with Arthur too. Affording the Scotsman a little more latitude from those suspicious of his determination to make the fight.

The biggest loser of course is Campbell, the 36-year old will hope to be recompensed for his efforts but will presumably lose the large part of his pay-day, crucial activity before Christmas and his billing as the Lightweight champion; Juan Manuel Marquez stopped Joel Casamayor to usurp the Galaxxy Warrior’s claim to the throne.

I hope Campbell manages to find a suitable opponent soon, it will be a shame if the hard-work he has put in to make weight and prepare is entirely wasted. He was also willing to fight Guzman too, something not every fighter from 122-135 could claim.