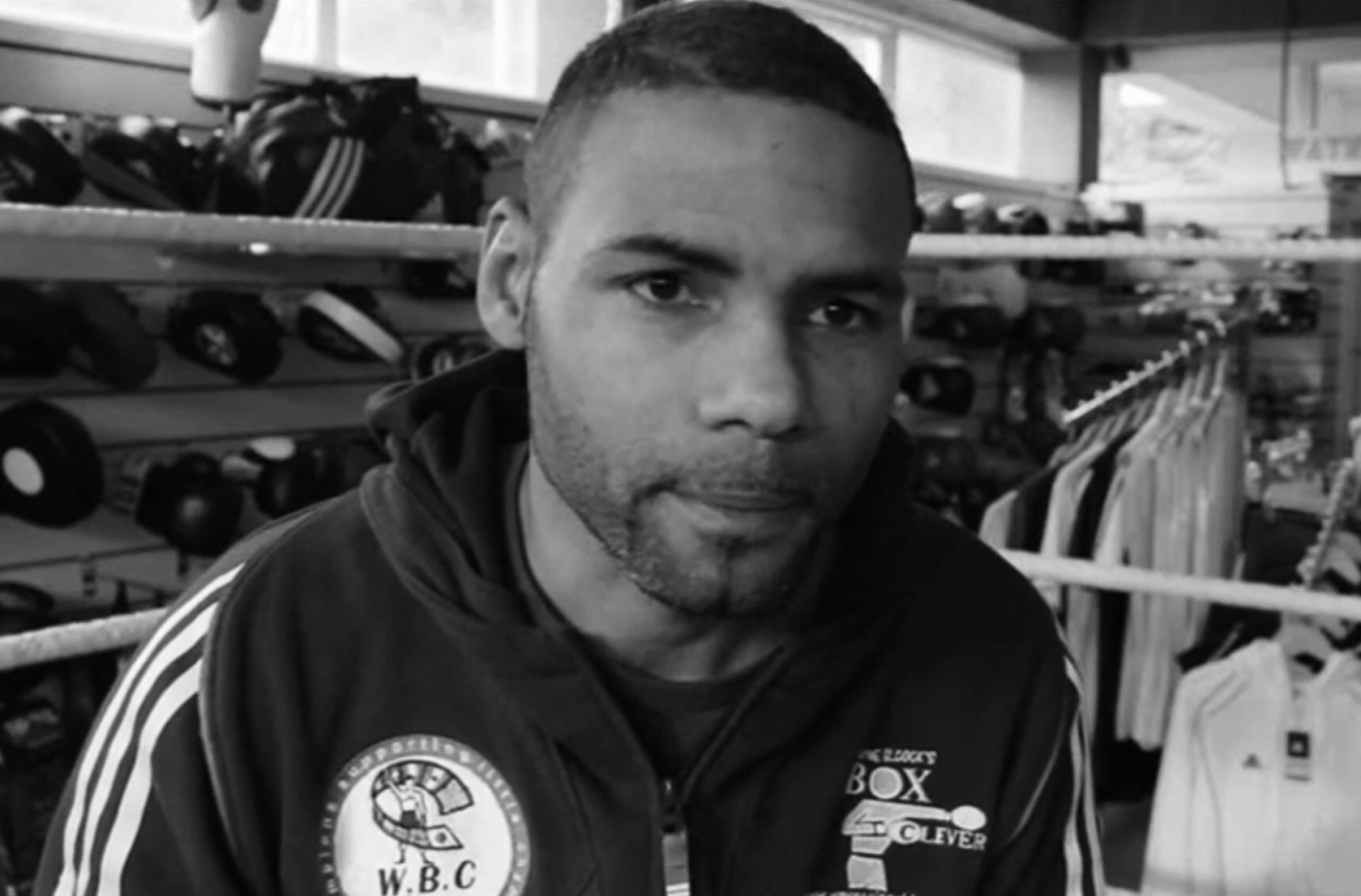 An interview with then British title challenger Wayne Elcock proved of sufficient interest to feature in the venerable British publication, Boxing News a fortnight ago. It was a moment of great personal satisfaction to appear on the pages graced by the great and the good over the past 98 years. Should it prove the most read piece I ever pen, it will represent a satisfactory pinnacle. Of course, I hope it will not , but in years to come the words committed to the page will remain in tact long beyond features I’ve written for the web. In an act of self-indulgence the unedited interview is included below.

Interviewing a fighter is a hazardous task. Not because the subject’s profession promotes tension or fear in the inquisitor, boxers are unilaterally the most friendly and generous interviewees, but such is their heart-warming sincerity, that the desire to successfully transpose their personality – so readily available in person  – on to the page becomes a compelling and exacting mission. Capturing something more of Birmingham middleweight Wayne Elcock’s individuality, his paradoxical mix of fearlessness and sensitivity is a difficult proposition. I wouldn’t claim to have achieved it but hopefully the following snatches a little more of the man than simply discovering the universal truth about all boxers, that if asked pre fight, Wayne faces Howard Eastman for the British title later this month, training will invariably have been “their best ever”.

In a domestic scene dominated for more than a decade by fighters from the North West, Yorkshire and Wales, Wayne’s Birmingham roots identify him more readily than his ‘Mad Dog’ nickname. Not since the world-class Richie Woodhall has Birmingham, or more generically, the West Midlands, laid claim to a middleweight of Wayne’s ability. Like so many fighters before him, boxing provided an escape from the troubled streets of his youth and a constant in times of personal adversity. “I grew up in the Shard End area of Birmingham, in a block of maisonettes where most of the tenants were single parents or problem families.”

Wayne’s youth amidst social breakdown is far from unique; in truth poor social conditions are a ubiquitous presence in the lives of most fighters. Despite an eagerness to better himself and reach beyond his surroundings, Wayne isn’t ashamed nor bitter about his roots, quite the contrary, “It wasn’t the greatest start in life, I’ve seen a lot of violence. I was forever in fights with the kids from in and around the area and I woke up to a burnt out stolen car outside the blocks most mornings. Though looking back, I wouldn’t change it for the world. I have fond memories of growing up there. Many of my friends and most of my family still live there.”

Family is a common theme throughout the conversation. Wayne firmly believes it is the lessons in life instilled by his late father that provided the discipline to avoid the criminality embraced by some of his contemporaries. “Where you grow up either makes or breaks you. Thankfully for me, my dad was strict and he managed to keep me on the straight and narrow. Most of the kids I grew up with turned to crime as a means of bettering themselves and many have wasted their youth in prison and some are still frequently in trouble.”

As a social force, boxing has become de rigueur. Politicians and personalities pointing to its fundamentals of respect, discipline and self-betterment as a way to reach disenchanted, disaffected young men. Too simple a concept for a complex problem? Perhaps, but it is a concept with tangible foundations. Programmes as diverse as Amir Khan’s high profile television series, Angry Young Men, which pitches boxing’s regimented training against a clutch of trouble-causing youngsters, to the more traditional campaign for a return of boxing in schools fronted by Wayne Llewellyn, all seek to use boxing to reform the behaviour of young people.

Away from the glare of the television cameras, which Wayne believes make Amir’s job all the more difficult – as participants mug and gurn to the attendant audience – he contributes to a similar scheme in the Midlands. “I have worked with Rugeley Police, who ran a program for troublesome youths over the past few years. I was asked to help out by Les Potts, the man behind it all, from the Midlands boxing board. Les’ done a tremendous job securing funds to keep it going year in year out and getting myself and other Midlands fighters to come down to train with them and give an insight into our sport. I’ve seen first hand the benefits it has had on some of these rebellious youngsters and in some cases I wouldn’t believe it was the same kid if I had not seen them from the start.”

Like Wayne, the Shard End area and midlands boxing, to which he is a leading figure, are enjoying a renaissance. The maisonettes and high rise blocks that provide the landscape to his childhood have been swept away and replaced by new housing, and the huge potential of Birmingham’s boxing scene has begun to emerge from the shadow of the buoyant hot beds of Manchester and Sheffield. Wayne is unsure why the sudden transformation has occurred but welcomes the revival; “The Midlands scene has definitely had a kick start with new promoters and an injection of some great young fighters coming through at both amateur and pro level. It looks really good at the moment and promising for the future and I would like to think we have all played a small part in its mini revival. I believe the best times are still to come, it would be great to see the Midlands putting on big fights regularly and with home-grown talent topping the bills.”

Sadly, the next step of this renaissance – Wayne’s landmark battle with two-time world title challenger Howard Eastman – will not enjoy the luxury or exposure of television coverage. A fact hard to fathom given the fight features Eastman, a well-known commodity, against a popular, aspiring contender for the classic British Middleweight title. In other words it ticks all the boxes stipulated by SKY, the most likely partner, since they dispensed with contracts to any particular promoter. “I’m disappointed it’s not on TV, it would have been great to be able to be broadcast to a bigger audience. But its not caused me any distress. I’m in front of my home crowd and that’s a big plus for me and at the end of the fight I’d love to prove Sky were wrong to not give it any air time.”

Sky’s lack of interest may stem from Wayne’s slow burn career, sidelined by contractual issues, injury and derailed by his shock loss to Scot Lawrence Murphy four years ago. If so, it’s hard on the entertaining former WBU belt holder. The fight is now promoted by Pat Cowdell, in partnership with Wayne’s trainer Paddy Lynch, following a successful purse bid for the reconvened contest. Original promoter Frank Maloney elected to withdraw when SKY turned down the clash. Wayne has worked hard to repay the faith demonstrated by those close to him. “I’m expecting a tough fight, I know I need to make him engage more. I’ve worked hard to be in superb condition to be able to make sure that happens on the night”.

As an objective observer its hard to believe Eastman can still muster the motivation for domestic level fights given the heights his career has already reached and his advancing years, but then Eastman has never been a conformist character. Sensibly, Wayne is preparing for the best possible version of the eccentric ‘Battersea Bomber’; “Eastman is the champion and has earned the right to be called that, he wouldn’t have achieved half of what he has if he wasn’t motivated enough. He has only recently won back the British and Commonwealth so it shows he still wants to compete at the highest levels, I don’t think he’ll struggle to get up for this fight.”

It was clear from the conversation Wayne had little trouble warming to the task himself. Fear, the English champion believes, is a necessary companion for a successful boxer. “I accept it [fear] yes, it’s normal and it keeps me sharp and focused. Fear is something I thrive on and need. The more fear I have of an opponent the better I perform.” Eastman’s domestic reputation is undimmed despite defeat to Arthur Abraham and Edison Miranda in high profile fights abroad, he remains the king of the British middleweights.  Engendering just the type of fear Wayne claims to need to deliver his best.

The Birmingham man still feels he has lots to achieve too. “It is fights like the one coming up against Eastman that will really answer the question of how good I am. I feel good but you need the tough fights to really put yourself to the test”Not that Wayne’s 33 years, an age which would have placed him out to pasture a generation ago, mean he’s not capable of further improvement. “I think the biggest improvement [in the past 12 months] would be my punching power. I’ve been encouraged, since working with my trainers Paddy and Tommy Lynch, to stand on my shots more. I’ve really grown in confidence to look for the bigger punches.“

Fighting for the British title, a previous challenge to the now retired Scott Dann ended in points defeat, seems a lifetime removed from his early days as an Amateur. Although talented as a footballer, his eagerness and natural affinity for boxing was evident from the moment he borrowed his fees from his mum. “I found boxing, rather than boxing finding me. My dad wanted me to concentrate on my football – I played at a high level as a schoolboy – but I went against his wishes and started going to a local club. I blagged a ‘tenner’ off my Mum to get my medical so I could box and the first my Dad knew of it was when I had already boxed and won my first three fights as an amateur. To be fair, he gave me all the support I could wish for when he knew boxing was where my heart was. He encouraged me throughout my amateur career right up until he was tragically taken from me in a car crash”.

The loss of his father in 1998 proved a watershed for Wayne, rededicating himself in a quest to ensure he fulfilled every ounce of his potential. Wayne’s father had clearly been a huge influence on him. “It’s sad he never got to see where my path has finally taken me. It really hit me hard, but I turned a negative in to a positive and the valuable lessons he taught me growing up have helped me progress and led me back to the gym to see if I was as good as he said I could be if I applied myself to boxing fully. There is hopefully still more to come, he’ll always be in my thoughts, watching over me and I do my best to make him proud.”

Few professional accomplishments could make a father more proud than the capture of the British Middleweight crown, a belt with history encompassing the reigns of great fighters like Alan Minter, Tony Sibson and Randy Turpin and more than a century of blood, sweat and pain.

On September 28th, at the Sky Dome, Coventry, Wayne will try to add his own name to that glittering roster, deliver on the promise his father always believe he had and further re-establish Midlands boxing into the bargain.

A heavy burden for one fighter but one that appears to rest lightly on the affable challenger’s shoulders.

4 thoughts on “Dreaming, Believing and Achieving with Wayne Elcock”